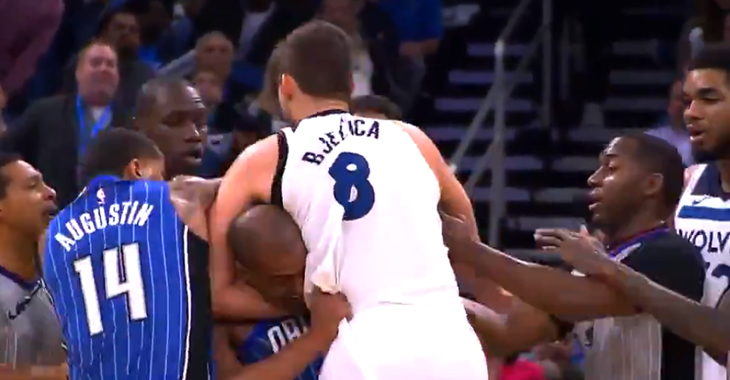 Aaron Afflalo threw a nasty punch at Bjelica, who put him in a headlock to stop it right there pic.twitter.com/0zAKOb3r1v

The fight year got warmed up at UFC St. Louis, but it is about to get kicked off in a huge away at UFC 220 this weekend with Bellator being aired at the same time. However, if you can’t manage to wait the three days for all that action, you can just watch this NBA game between the Orlando Magic and Minnesota Timberwolves. Arron Afflalo from the Magic slung a crazy wide haymaker at Timberwolves forward Nemanja Bjelica on Tuesday night, then fell right into Bjelica’s standing guillotine. NBA MMA anyone?

Afflalo definitely getting suspended for this. pic.twitter.com/Xv7TO5h3Tj

“First of all, I want to apologize to my teammates and coaches because I got ejected, but what can I say? We were hitting each other during the game, offense and defense, that’s part of the game. He took a swing on me and I was just trying to protect myself and to calm him down because he was wild. I don’t know what’s wrong with that guy. At that point, if you attack me like that I just have to protect myself. Everybody who knows me knows I’m like calm guy. I was raised on the streets but I’m a professional basketball player, I don’t ever fight during the game. I don’t want to feel like I’m the victim here, but I just tried to protect myself and I’m very happy. Thank God I react that way.” — Nemanja Bjelica during the Wolves Radio post-game interview.

This all happened in the second quarter of. To Bjelica’s admission, the two were getting into it throughout the game and it looks like Affalo just finally had enough after a rebound attempt. The punch was so wild it was really more like a forearm smash, but Bjelica’s guillotine was on point. Although, he later said he had no intention on hurting the rival player, but merely calming him down. NBA’s Orlando Magic ended up winning the game 108 to 102, but Bjelica would have won the fight if it had went down in the Octagon.

What is going on in the NBA 👀 pic.twitter.com/uKPZ4hnAA9