The middleweight division was about to get rewound back to normal, that is until Robert Whittaker got injured. That’s not the only curve ball the division got thrown. Urijah Hall failed to weigh in and was taken out of his fight with Vitor Belfort. Many jumped to the conclusion that this opened the door for Belfort to fight former rival Michael Bisping in a double retirement fight at UFC London. It seemed like the fight was more than just talk, until Bisping said he wanted nothing to do with the ‘cheat’. Belfort isn’t taking no for an answer though, coming back with a social media low blow.

“What a shame Michael Bisping. The UFC just informed me that you have declined the fight. I understand you are scared. The images above pretty much explain it all. So stop pretending that you are tough and just admit that you are afraid. And I thought you were man enough to step up in the octagon with me again, my mistake. Unfortunately, it looks like we will not be delivering to the fans the fight they want to see. Happy retirement, you must be feeling amazing leaving the sport through the back door. To be a legend is not for everyone.” — Vitor Belfort on his official Instagram. 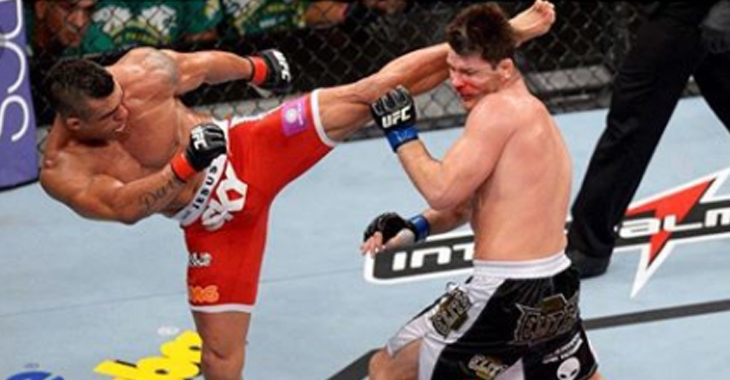 “Here’s the thing. I don’t like Vitor Belfort. People looking at this video are probably saying, ‘Look at his eye, he’s a f-cking mess.’ It is part of the reason why I never wanted to do a video podcast before, because my eye is a mess and it was Vitor Belfort that did it and he was roided out of his mind. He’s a known drug cheat. I don’t like the guy. I find him to be a hypocrite. It’s his last fight and he’s probably going to juice like crazy again anyway because who gives a f-ck. ‘Oooh, I failed. So what? Retired. Done. Gone.’” — Michael Bisping speaking to MMA Fighting about the potential fight.

While many thought it’d be the perfect retirement fight for both men and a chance for Michael Bisping to exact his revenge, the former middleweight champion has his own reasons why he doesn’t want to give Vitor Belfort the satisfaction of the match-up. Both are still planning to retire in their next fights, against whichever opponent they may be against. That is, unless Belfort gets his $10 million demand. We’ll keep you posted on their next opponents as they are finalized.

This article appeared first on BJPENN.COM
Previous articleVIDEO | Things Get Violent Between the Orlando Magic and the Minnesota Timberwolves
Next articleBREAKING | A Huge Rematch is Slated for UFC 223 in Brooklyn
© Newspaper WordPress Theme by TagDiv