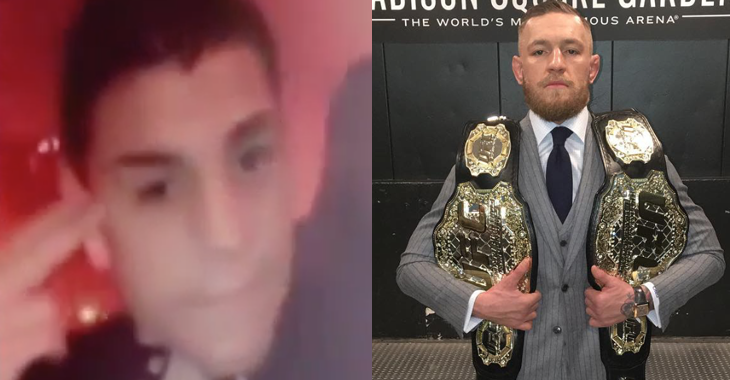 Nick Diaz was in attendance at the 1 Oak Nightclub in New York for Conor McGregor’s UFC 205 afterparty.

It’s unclear whether Diaz was invited to the afterparty by the club or if he just showed up to see how “The Notorious” and his team would celebrate after making history by becoming the first fighter to concurrently hold the status as the champion in two separate UFC weight divisions.

“Shout out to the Irish in New York,” McGregor said on the mic to his fans. “We built this city.”

McGregor went on to call out Floyd Mayweather’s name for a fight and also made sure to let the fans know of his own success coming from Dulin, Ireland.

Diaz took to Snapchat where he also reacted to McGregor’s speech and mocked what the UFC two-weight champion had to say. Diaz gave his own statement to his followers.

“I was already the two-weight world champion bitch,” Diaz said as McGregor was still on the mic addressing his fans.

Diaz then gave the middle finger salute and said, “F*** you!”

The history between the Diaz brothers and Conor McGregor doesn’t go back very far as Nick’s younger brother Nate was the first man to defeat “The Notorious” in the UFC Octagon at UFC 196. Diaz stepped in on short notice after Raphael dos Anjos pulled out of his scheduled bout against McGregor and finished the Irish superstar with a rear-naked choke submission in the second round of their non-title welterweight bout. McGregor would even the score in their rematch at UFC 202 where he picked up a judge’s majority decision over Diaz.

With Nate Diaz comfortably waiting on the sidelines for the trilogy fight with McGregor, it is uncertain what match will come next for both of the Diaz brothers or Conor McGregor. What matchup would you like to see Conor McGregor, Nick, and Nate Diaz in next? Sound off in the comment section!