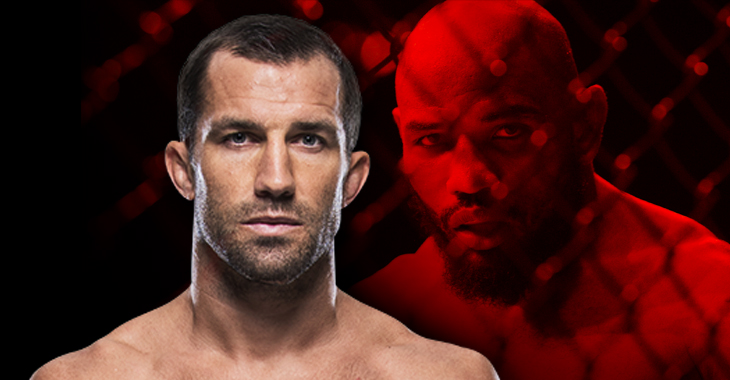 As the middleweight division spins effortlessly back into chaos again, two men will try to set it back on its axis tomorrow. Luke Rockhold will fight Yoel Romero at the main event of UFC 221 for an interim middleweight title, created in response to newly-awarded undisputed champ Robert Whittaker’s triple threat health bomb. Romero and Rockhold have been on a collision course for years and now they finally get to scrap. He thinks he’s better everywhere and his coaches believe him too.

It’s hard to say [who is the worse match-up for Luke Rockhold] because they both have different strengths. Yoel [Romero] is very explosive, great wrestling, but [Robert] Whittaker is good everywhere and a very dangerous striker. They’re both different, but the thing is with Luke, Luke’s good everywhere. So Luke can finish those guys in every department, where they can’t. They can’t finish Luke everywhere, they can’t finish Luke on the ground, they can’t do this with Luke. Luke can do that to anybody.”

Rule number one when fighting @YoelRomeroMMA…

watch out for the flying knees. #UFC221

“So, [Rockhold]’s the more well-rounded of the two and he can finish the fight anywhere with both of those guys. So, that’s where I think we have the advantage, and Luke’s mind is very sharp and he believes that that’s exactly what he can do – finish it anywhere, and he can. It’s gonna be a methodical type of fights that if Yoel doesn’t get that lucky strike in – well, I shouldn’t call it lucky, because he meant to do it – but, that’s his only chance. He’s not gonna outpoint Luke and he’s not gonna out-grapple Luke – he can wrestle Luke, but this isn’t wrestling, this is MMA.” — Coach Javier Mendez speaking to Submission Radio.

Ah, but there is that one “lucky strike”, which as Mendez backtracked slightly, may not be that lucky. It may the fact that Yoel Romero looks like he’s the body double stand-in for Thanos in MARVEL movies and can launch his body violently into orbit whenever he wants. This is one of the highest level middleweight fights in the world right now and presents a compelling stylistic match-up as well. All eyes will be down under come tomorrow night at UFC 221’s main event.