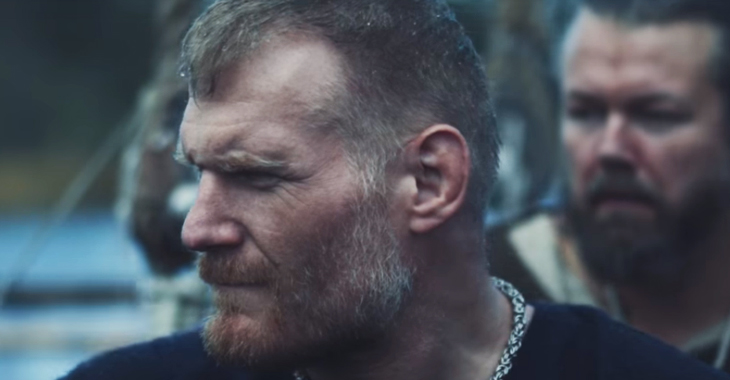 The warrior spirit is forever tethered to Josh Barnett and his brutal Spotify playlist. If this was any other time or era, he would still be running full speed into battle. Whether he’s doing it physically, or by putting down a Lord of the Void in Magic: The Gathering, Barnett always finds time for violence. It’s just who he is. Let’s take his Summer vacation, for instance. While you were probably out at the beach, Josh Barnett was preparing a group of Vikings in Sweden for conquest. Your consequences were a hangover and a sunburn; their consequences were death.

“So, I spent some time in the summer in Sweden with my friend Johan Hegg and Grimfrost and after a bit of mead, well, things got adventurous to say the least. Take a look: The Viking Raid!” — Josh Barnett from his official Facebook.

The short film clocks in at just over five minutes, but you want it to be much longer. Josh Barnett doing M-1 Medieval sword battles? That’s an automatic win, but adding a Longship rowing over a dark green sea just takes everything to the next level. You have full trust in Josh Barnett. As he leaps onto the land with his axe, you feel confident it will be a successful raid. Come to see the former UFC heavyweight champion kicking ass, stay for the incredible history lesson by Grimfrost.

“Grimfrost is a Swedish company founded in 2014 with the goal of sharing our heritage, as well as our modern-day lifestyle with the rest of the world. We are dedicated to making and selling the highest quality Viking reproductions on the market, ranging from simple pendants to unique high end products not found elsewhere. In addition to historical items, we also offer contemporary products that have been inspired by and interpreted from Viking Age culture. A culture that doesn’t adapt, develop and find a contemporary footing is dead, or in a best case scenario just an echo from the past. Our heritage is very much alive to us – it’s not something that just exists in the past, or that requires dressing up in traditional clothes for reenactment gatherings. Our aim has always been to build a bridge between now and then, and bring relevant parts of the culture into today’s world. There is wisdom to be learned from, achievements to be inspired by and an entire cultural treasure to embrace. That is the way to become a modern Viking, a Viking at heart.” — From Grimfrost’s official website.

Yesterday was a time travel back to a time of my ancestral heritage – the era of Vikings. . Wearing traditional garb, eating traditional food, weapons sparring, rowing a long ship, and storming a beach in 40lbs of chainmail was all in a good days work for the Warmaster. . With @amonjohan, @TheGrimfrost, my fellow Viking brothers, and Odin by our side we were victorious! 💀 . #Grimfrost will be releasing a video from all we did today in the very near future so be on the lookout. . Skál! 🇸🇪 . Photos by @stormvild . . . #Vikings #Viking #Skal #JohanHegg #JoshBarnett #TheWarmaster #Warrior #Longship #Axe #Sweden #Odin #Thor #Mjolnir #SWE #AmonAmarth #Metal #HeavyMetal #Battle #Stormvild