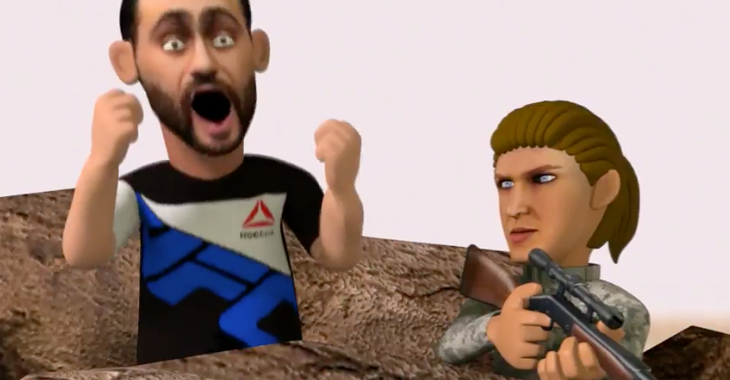 Much of the criticism surrounding former UFC women’s bantamweight champion Ronda Rousey and her pair of losses are being aimed at her coach, Edmond Tarverdyan.

Rousey’s own mother, Olympic judo gold medalist AnnMaria De Mars has made it loud and clear with her disapproval for Tarverdyan.

With Rousey coming back to face Amanda “The Lioness” Nunes for her championship title at UFC 207 after taking over a year off from her first professional MMA loss against Holly Holm, Rousey was finished by TKO in the very first round by Nunes. It took Nunes just 48 seconds to finish the title fight as she hurt Rousey seconds into the fight with some devastating strikes.

In this parody video, twitter user @MojahedFudailat animated Rousey and Tarverdyan hunting “The Lioness” and uses Tarverdyan’s audio from when he was cornering Rousey in the UFC 207 title fight.

Hunting Monsters is never easy
especially when u don't use your best tool
and bring with you a panicked Assistant #UFC207 @mma_gifs_ pic.twitter.com/37xKOPvo2w

Ronda Rousey now holds a professional record of 12-2 with both losses coming in her last two fights. Following the loss to Nunes, Rousey gave a statement to ESPN expressing her gratitude for all of her supporters. The former champion also stated that she is unsure what her plans are for the future.

“I need to take some time to reflect and think about the future,” Rousey said. “Thank you for believing in me and understanding.”

Amanda Nunes is now 14-4 and on a five-fight win streak and became the first UFC women’s bantamweight champion to defend the title since Rousey. Nunes last loss came against Cat Zingano in 2014.

What do you think is next for Ronda Rousey and Amanda Nunes? Sound off in the comment section!