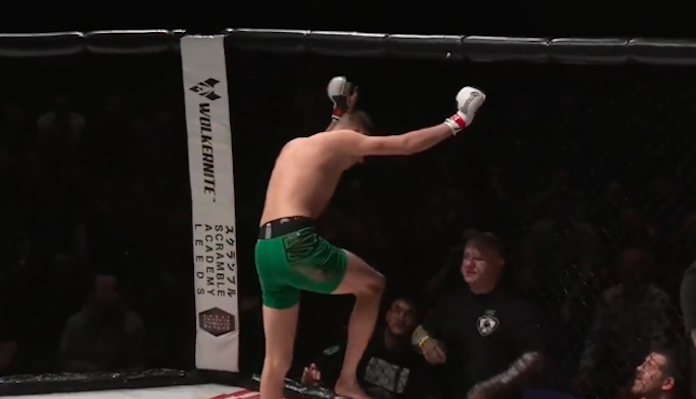 In the sport of MMA, there’s no victory celebration more tried and true than a fighter scaling the cage and throwing their arms up in triumph. We’ve seen countless fighters do so after big stoppage victories. Santiago Ponzinibbio did so just last weekend after knocking out Neil Magny in the UFC Argentina main event.

Apparently, however, nailing this post-fight celebration is not as easy as it looks.

At Almighty Fighting Championships 10, which went down in York, England, over the weekend, an amateur MMA fighter named Jack Culshaw learned this the hard way.

After defeating his opponent Zak Edwards with an impressive first-round TKO, Culshaw climbed the cage, threw his hands up in celebration, and then leapt back down to the canvas.

Unfortunately, he didn’t stick the landing.

As you can see in the video above, Culshaw starts limping immediately after he’s made impact with the ground. He then hobbles to his corner, and gestures to his to visibly injured limb.

It’s clear that the young amateur MMA fighter hurt himself during this victory celebration, but here’s hoping he hasn’t done himself any serious damage.

Time will tell if he ever celebrates in this fashion again.

(h/t to MMANytt for the information on this bout).