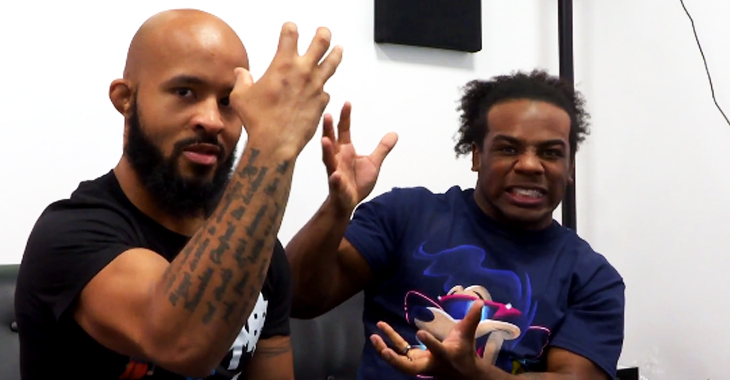 If you’ve followed UFC flyweight champ Demetrious Johnson‘s life at all outside of the Octagon, you’d know that when he’s not dominating in the Octagon, he’s interacting and playing against fans on his Twitch stream. Rain or shine, holiday or no holiday, he can be found playing all your favorite games live on the platform. Recently, two streaming and sports entertainment worlds collided when Johnson and WWE’s Xavier Woods got together and played some of the new Dragon Ball FighterZ game. You don’t even have to insert a coin to check it out.

“That’s what we’re working towards [to be the best fighter on planet Earth]. Gotta keep on working harder to cement that legacy. One hundred percent [I would want to be in a Tournament of Power in the Universe Survival Saga]. One hundred percent. I would win it. I don’t want to spoil the sagas coming up for you, but I’m probably one of the strongest guys in that tournament.”

“I would give anything [to be a character in Dragon Ball]. You know, there’s only one other black guy in the Dragon Ball Z universe and that’s Uub. He’s not that strong, but I’ve been telling everybody, jsut come on. Just DLC (downloadable content) character, or just draw me please. Make it happen, Japan. Jsut make it happen, somebody. It’d be dope if I could, man. Bandai. DLC character. Right here.” — Demetrious Johnson speaking to Xavier Woods (aka Austin Creed) on UpUpDownDown. Demetrious Johnson took the fellow gamer down two games to zero in the session. Late last year, Max Holloway also took down Woods’ teammate Big E in EA Sports UFC 2.  That puts UFC fighters up two to zero in battles against WWE’s The New Day. We wonder who Kofi Kingston is going to play against?

During the battles, the two talked about their favorite games and history getting into streaming, as well as the Dragon Ball franchise itself. Johnson even campaigned to be included in the game as a playable character. While it seems unlikely, it would be huge if this went down. It’d be so awesome, it’s probably worth all us fight fans rallying with our flyweight champion to get in the game. C’mon, Johnson as a Super Saiyan? Who doesn’t want to see that?