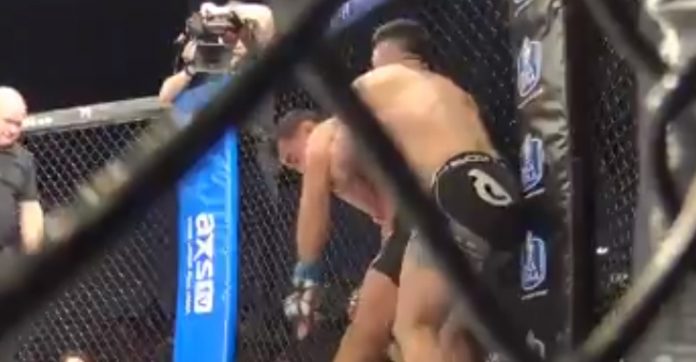 So, @DanielPitPineda told me there was a pool for him to land the @MightyMouseUFC video game armbar at #LFA35. The pool had surpassed $2K, I even pitched in $100… check out the video; I kept my $100. @LFAfighting @AXSTVFights @patmiletich @microphonephoen #MMA #HoustonMMA pic.twitter.com/W7LXS4mntV

Demetrious Johnson cemented himself in history when he beat Anderson Silva’s title defense record at UFC 216. But it wasn’t just that he did it, but how he did it. Launching Ray Borg into the air and then snapping back an arm bar as he fell back down, Johnson made everyone’s mouths drop and created a new move that is hard to replicate. Just ask former UFC and Bellator fighter Daniel Pineda when he tried it at LFA 35.

From none other than Mike ‘The Truth’ Jackson, it turns out there was a betting pool going that he even threw $100 into, that he’d be able to pull off the Mighty Wiz Bar in his Legacy Fighting Alliance bout from Friday. He almost did it, but wasn’t able to finish Josh Davila by armbar. He did eventually bully his way to a win, which is really what matters.

Demetrious Johnson has been telling everyone he has more secret moves where that came from, one called The Mouse Trap, which is what everyone called his German suplex/arm bar combo. As we wait to see if he’ll be fighting TJ Dillashaw, Henry Cejudo or Joseph Benadivez, we’ll also be wondering if he’ll be able to debut some more video game finishing maneuvers in his next scrap.