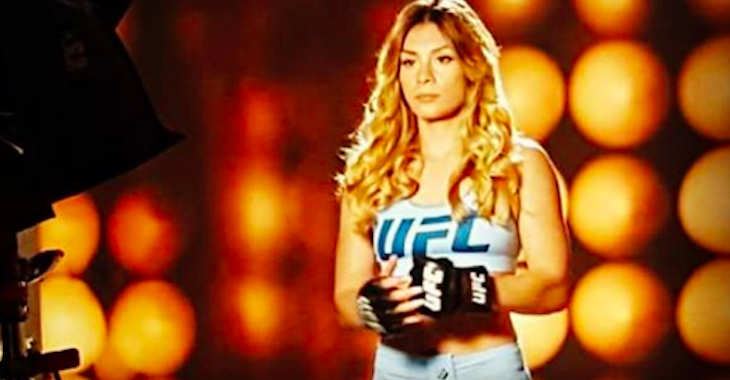 The UFC crowned their first ever female flyweight champion last December when capping off season 26 of The Ultimate Fighter. Of the sixteen competitors, the #14 seeded underdog, Nicco Montano would come out the victor by defeating all of the top three seeds on her way to doing so.

Since Montano defeated seasoned veteran and pioneer, Roxanne Modaferri to win the title, Montano has been battling a very bad case of arthritic turf toe on top of a fracture in her foot that almost prevented her from even fighting for the title.

Montano spoke with KRQE about how the recovery process has been.

“It’s my ultimate goal to come back into fighting, you know. To be here. I’ve got to really pay attention to my foot. A lot of times as fighters or as athletes you’re like, ‘oh you’re sore’ but that’s like, that’s a good sore. You can push it another couple days. But with this, it’s like if i’m sore then i’m out for two weeks. I really have to watch it.

I ran last week for the first time in like three months. So, it’s exciting. Small steps. There was a time when I was like, I don’t know if I will be able to fight again, You know, how many fights do I have left in me?

The reality of it is, I have to be back in the cage soon. I’m shooting for this Summer. I’m  really hoping to get on that Vegas card.”

The card that Montano is referring to is the big international fight week card on July 7th, UFC 226 which is headlined by the heavyweight super fight between champions, Stipe Miocic and Daniel Cormier.

As for who Montano may defend her title against first, all signs point to the former bantamweight title challenger and multiple time Muay Thai champion, Valentina ‘Bullet’ Shevchenko. UFC President, Dana White wants the fight, Shevchenko wants the fight and now it all likely relies on Montano.

“I’m not totally sure [what’s next]. I had my last doctor checkup this past Wednesday, and I don’t get my MRI until tomorrow then i’m going to send them in where i’m at now and what I can do according to everyone who’s been around me and then we’ll go from there. If Shevchenko wants to hold off until i’m ready, why not?

I’ve watched her from the beginning, i’ve always been a Shevchenko fan. It’s so surreal being able to be where i’m at, starting from where I started because I haven’t been in the game long enough but I might fight Roxanne, I might fight Shevchenko, like i’m still fangirling over these names.”

It seems like every champion and their mother has been asking to get on UFC 226, but will it actually happen? We’ll just have to wait and see.

When do you expect Montano to return?