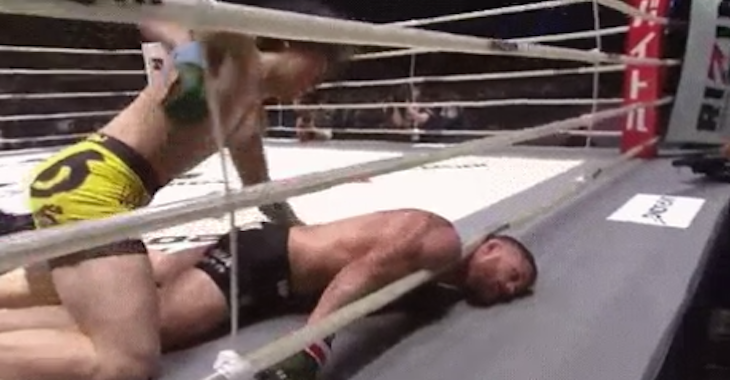 Though UFC on Fox 24, which was highlighted by emphatic wins from Demetrious “Mighty Mouse” Johnson, Rose Namajunas and Robert Whittaker, dominated the attention of MMA fans on Saturday night, it was not the only major MMA show on the calendar.

Shortly after the UFC on Fox action wore down in Kansas City, Missouri, Nobuyuki Sakakibara helmed Pride-revival Rizin Fighting Federation touched down in beautiful Yokohama, Japan with its latest show – and it was pure brutality.

Over the course of this latest Rizin event, we witnessed some truly emphatic stoppages – many of which included the soccer kicks and stomps that Japanese MMA is so beloved for. The show also included the Rizin debut of former UFC flyweight title contender Kyoji Horiguchi, who landed some stomps of his own en route to a unanimous decision defeat of the dangerous Yuki Motoya.

Of all the emphatic wins on the card, however, it’s arguable that none held a candle to Yusuke Yachi’s crushing, one-punch KO of UFC veteran Daron Cruickshank. This thudding knockout sent the UFC vet careening face-first into the canvas, where he settled in a motionless, unconscious heap. See Yachi’s thunderous knockout win below:

Here’s the same bit of brutality from another angle

With this win, Yachi moves onto a three-fight streak, and to 2-0 under the Rizin banner. He’s now 17-6 in sum. Cruickshank, meanwhile, falls onto a two-fight skid, having been submitted by Satoru Kitaoka in his next most recent bout. He’s now 2-2 as a member of the Rizin roster and an unfortunate 6-3 (with one no contest) in his last 10 fights.

Cruickshank is not the only American to face-plant on Asian soil over the last few days. Fan favorite “Felony” Charles Bennett experienced a similarly decisive KO loss in China just days ago. See that here.

Do you think it might be time for Daron Cruickshank to hang up the gloves? Sound off, PENN Nation!