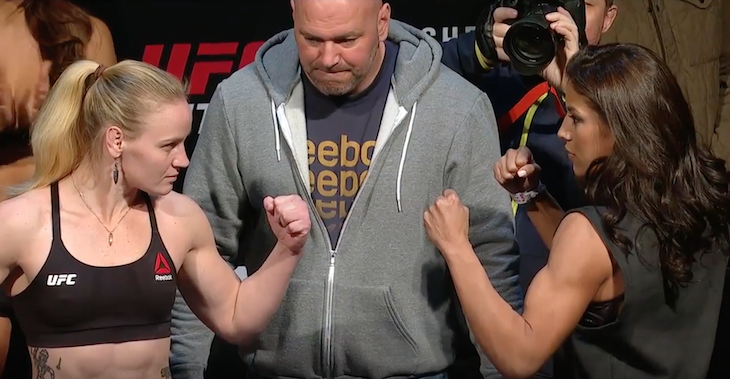 For Valentina Shevchenko, the win not only put her on a 2-fight win streak, but also resulted in her having the opportunity to avenge her only UFC loss as she will inevitably step into the Octagon with Amanda Nunes again. During a recent appearance on The MMA Hour, Shevchenko reflected on the win, and the submission, saying:

“When I was on the ground and she started to throw punches, they weren’t hard, they weren’t effective because I was covering everything, and she didn’t hit one strong punch or anything like that,” Shevchenko told Ariel Helwani on Monday’s edition of The MMA Hour. “But when I tried to go for the submission, got her arm and put my belly down, in that moment, I felt like two or three times a click in her arm, like, ‘crack, crack, crack,’ and then I felt, ‘this is it, I have this armbar. It’s only a matter of time before she taps.’ But then, she started to protect it, so I just put a little bit of pressure and she tapped at that moment.”

“For every fight, I’m not only thinking about one strategy, my coach Pavel [Fedotov] is always thinking about every possible situation that I will possibly be in during the fight,” Shevchenko explained. “That’s why we’re training standing, wrestling, jiu-jitsu, everything, but I was pretty sure I would take this fight, I would win this, and I was prepared for striking, submissions, everything. Before the fight, everyone asked me, ‘Valentina, you’re a striker, how do you feel about your wrestler opponent?,’ and every time I would say, ‘I’m a martial artist, I’m a complete fighter.’”

So far no word yet on when Nunes and Shevhcenko will throw down for the title. Stay tuned for updates as they become available.