With Miesha Tate retired and Holly Holm on a two-fight losing streak, Julianna Peña and Valentina Shevchenko stand out as the two best female bantamweights on earth outside of Amanda Nunes and Ronda Rousey. According to a Monday afternoon report from ESPN’s Brett Okamoto, they could soon be pitted against each other.

Not officially done quite yet, but hearing some very good vital signs regarding a fight between Julianna Pena and Valentina Shevchenko.

At the moment, it’s not clear when or where this high-stakes bantamweight showdown would occur. There have been whispers, however, that the UFC’s January 28 trip to Denver, which will air on FOX, will be headlined by a yet unannounced women’s bout. This could well be the women’s bout in question.

No matter the time and location of this fight, it would be a huge one for the women’s bantamweight division, as Shevchenko and Peña hold the number two and three spots in the divisional rankings respectively. In fact, the winner would probably be a shoo-in for a bout with the winner of UFC 207’s Amanda Nunes vs. Ronda Rousey bantamweight title fight.

Shevchenko, who hails from Kyrgyzstan but lives in Peru, would enter the fight having recently bounced back from a close loss to Nunes with a decision defeat of former champion Holly Holm. The striking specialist currently owns a solid overall record of 13-2. 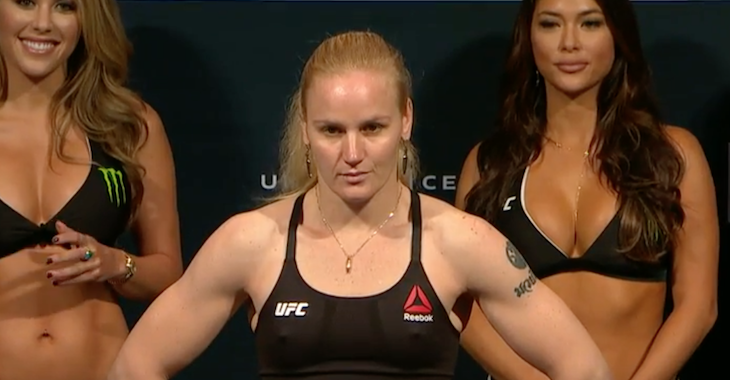 Peña, who was the winner of The Ultimate Fighter 18, would enter this prospective showdown with four-straight wins in her wake. This streak began with a pair of TKOs over Jessica Rakoczy and Milana Dudieva and continued with decision defeats of top competition in Jessica Eye and Cat Zingano. She’s 8-2 in sum.

This bout was briefly rumored for UFC 205, which occured in November in New York City. Though it never materialized back then, it looks like a real possibility in the first quarter of 2017.

If this bout occurs as Okamoto’s Tweet suggests, who do you think comes out on top? Sound off in the comments, PENN Nation!