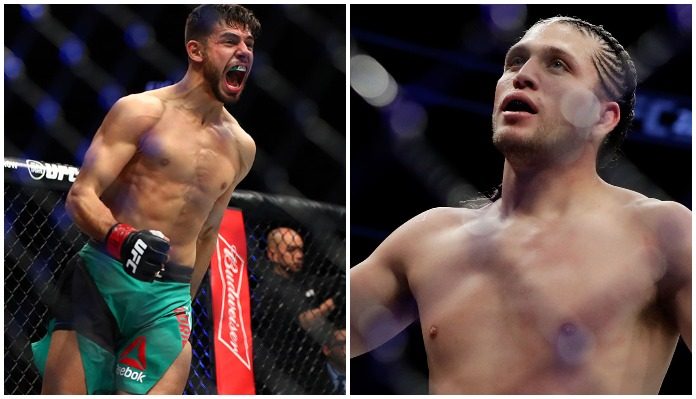 Two ranked featherweights will be fighting at UFC Mexico, but maybe not each other. Both Yair Rodriguez and Brian Ortega will  fight on the card according to UFC president Dana White.

“He will, Yair Rodriguez will fight in Mexico City. Yeah, he (Brian Ortega) will too,” White said at the summer press conference.

Yair Rodriguez last fought back at back in November at UFC Denver where he knocked out Chan Sung Jung with one second left in the fifth round. Prior to that, the Mexican-native lost to Frankie Edgar to snap his eigh-fight winning streak which included wins over B.J. Penn, Dan Hooker, and Andre Fili among others. He is currently 11-2 as a pro and ranked eighth in the featherweight division.

Brian Ortega, meanwhile, is coming off of a title fight loss to Max Holloway at UFC 231. There, he put his undefeated record on the line and lost via doctor stoppage at the end of the fourth round. Before that, he was the first person to finish Frankie Edgar, and also submitted Cub Swanson and Renato Moicano. He is currently ranked second in the featherweight division and has been linked to a fight with Zabit Magomedsharipov that was rumored to happen this summer.

Whether or not the two fight each other or will face different opponents is currently unknown. All White had to say is both will be on the Mexico City card which takes place September 21.

Although those two are on the card, Mexican-American, Cain Velasquez is unlikely to be on the card according to Dana White who says hasn’t heard anything from him recently.

UFC Mexico is currently without a main event, but now has two fighters confirmed for the fight card.

Who do you think Yair Rodriguez and Brian Ortega should fight at UFC Mexico? Sound off in the comment section, PENN Nation!