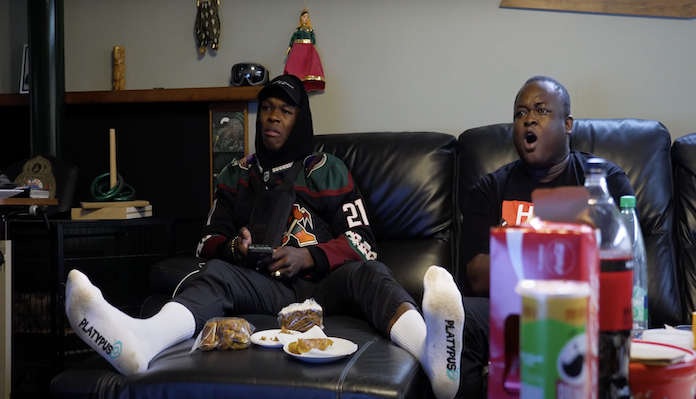 In a new video posted to his YouTube channel, watch Israel Adesanya react to Conor McGregor breaking his leg in the main event of UFC 264.

Like everyone else who loves MMA, Adesanya was watching the UFC 264 pay-per-view card with a group of his friends and was glued to the action for the main event between McGregor and Poirier. The fight started off strong for the Irishman as he was able to land some hard kicks on Poirier, but as soon as McGregor went to his back on the ground, it seemed like the tide turned in the fight. Ultimately, Poirier won the fight via first-round TKO (doctor stoppage) when McGregor was not able to continue due to his injury.

Taking to his YouTube following the fight, Adesanya shared his immediate reaction to the fight. Watch it below.

“Yeah, it was a good fight,” Israel Adesanya said in the video (h/t MMAjunkie.com). “I like the way Conor opened up. This is one of the reasons I don’t jump for guillotines because Eugene says if you fail a guillotine, you’re on bottom. That’s the problem. And it was tight. It was tight, but the cage was in the way, so Dustin was able to stop and defend by not letting him get his leg wrapped and put him in guard,” continued Adesanya.

“Then Dustin, f*ck, the recovery. There’s a point when he was on top and he was just like throwing bombs. The pace was good. The pace he was throwing at was just bewildering Conor. Credit to Conor as well because from bottom he was throwing shots, throwing them elbows, getting crazy,” said Adesanya. “That was just a freak accident. Dustin reckons it was a check, Conor reckons it wasn’t. Yeah, crazy fight. They’re definitely gonna do it again. They’re gonna run it back and then we’re all gonna watch.”

What was your reaction to Conor McGregor breaking his leg at UFC 264?