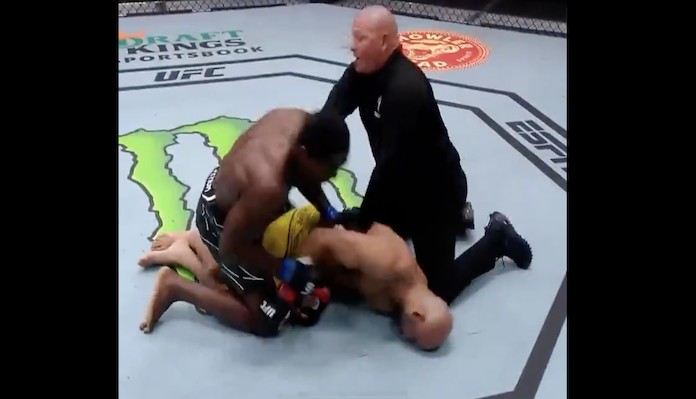 UFC welterweight Warlley Alves reacted after his upset KO loss to Jeremiah Wells at UFC Vegas 30, saying that “I have no excuses.”

Alves was knocked out by Wells in the second round of their welterweight fight that took place on the UFC Vegas 30 preliminary card. For Alves, it was a shocking defeat to a fighter who was making his UFC debut on short notice in Wells. The veteran Brazilian entered the fight as the betting favorite to get his hand raised, but he was brutally knocked out in the second round by his powerful opponent. For Alves, it was yet another tough loss for him in the Octagon. While Alves is a solid 8-5 overall in the UFC, he is just 2-3 in his last five fights and he was knocked out or submitted in all three of those recent losses he’s had.

I have no excuses for today, today the responsibility for what happened belongs to me, my coaches and team did their best, we didn’t expect it to end this way, but I’m still grateful to God for today! “He’s still good, He’s still God.”

Although Alves is a former Ultimate Fighter Brazil winner and has a submission win over Colby Covington on his resume, he has struggled to maintain consistency as of late and it’s possible that the UFC could release him after his recent struggles. Of course, the UFC may give him another fight given his last fight was a body kick TKO win over Mounir Lazzez.

What do you think is next for Warlley Alves after losing to Jeremiah Wells at UFC Vegas 30?