The camera was rolling as former UFC welterweight champion Tyron Woodley attempted to enter shark-infested waters off the coast of Hawaii.

Woodley (19-7-1 MMA) was on vacation earlier this month in the Aloha State and decided to get adventurous under the watchful eye of Ocean Outfitters Hawaii.

The crew took Tyron Woodley on a trip to a known shark hotspot so that ‘The Chosen One’ could get up close and personal with some of the baddest fish in the ocean.

As seen in the footage below, Woodley had a tough time finding the confidence to enter the shark-infested waters once on scene.

While Woodley did muster the courage to jump in for a quick peak, he was quick to leave the water after allegedly noticing eight sharks.

Tyron Woodley fought out his UFC contract back in March, where he suffered a first-round submission to Vicente Luque. It was his fourth loss in a row after suffering a TKO defeat to Colby Covington, and decision losses to Gilbert Burns and Kamaru Usman.

UFC President Dana White has hinted that Woodley’s recent bout with Luque was likely his last with the promotion.

With that said, ‘The Chosen One’ has expressed his desire to box YouTuber Jake Paul, who is coming off of a knockout win over Woodley’s teammate Ben Askren in his third professional boxing match.

“Jake Paul is — well I guess we kind of recognize he came from Disney — but we’re expecting him to be like this f*cking macho-macho man he’s playing but he’s calling out everybody but me. I’m the one with real smoke with you.” Tyron Woodley proclaimed. “At the end of the day, that was Ben’s fight and I never want to take away the moment from Ben. That was his opportunity so everybody backstage is trying to get love and trying to get their name – almost the same way Jake took the shine away from Logan. They’re just Culture Vultures. He would vulch the juice from his own damn flesh and blood. His cornerman trying to take the juice from him. His whole crew moves goofy. My dogs don’t move like that.” 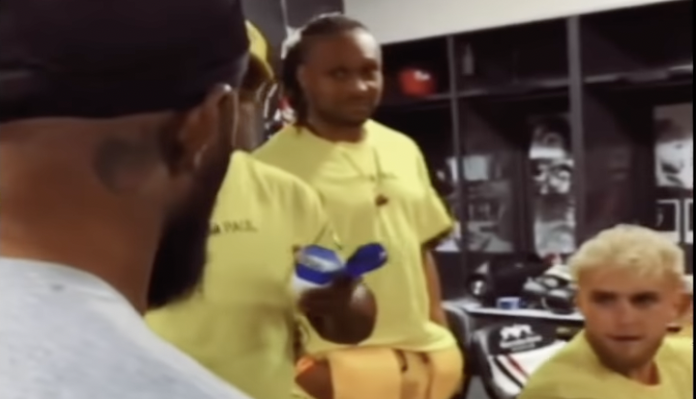 “I was in the gym today in Miami training, looking around for Jake Paul, I ain’t seen him nowhere. He ain’t asked to fight me one time. He want to fight Dillon Danis who couldn’t bust a grape in a fruit fight or Tyson Fury’s cousin but he don’t want to fight a real puncher. He wants to walk around and vulch from the culture and suck it dry and walk around and take shots with rappers and think you’re a big shot fighter. Nah, come and get this smoke for real.”

What did you think of Tyron Woodley’s attempt at swimming with sharks? Share your thoughts in the comment section PENN Nation!