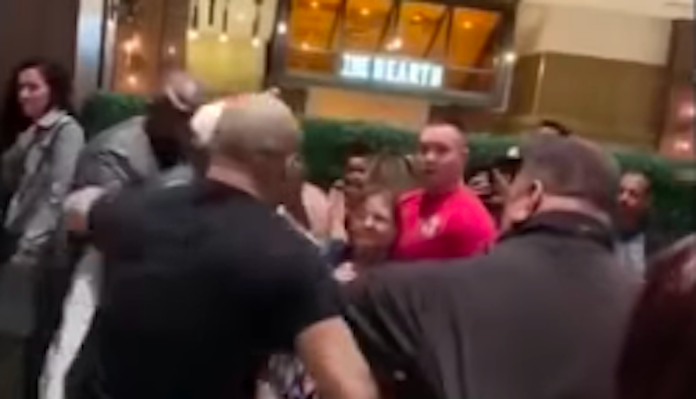 Shortly after UFC 235 wrapped up, there was a heated confrontation inside The Palms casino, as UFC welterweight champion Kamaru Usman and his manager Ali Abdelaziz confronted top welterweight contender Colby Covington.

This confrontation ultimately got somewhat violent, as video revealed the manager Abdelaziz actually took a swing at Covington.

New video of this incident, obtained by TMZ, shows this altercation from another angle. From this new angle, Usman appears to be holding Abdelaziz back before the altercation starts. From there, Ali Abdelaziz can been seen going after Colby Covington, and ultimately taking a swing at him.

Needless to say, Colby Covington and Kamaru Usman now represent two sides of one of MMA’s most heated rivalries. The good news is that they will soon have the opportunity to settle their beef, as they’re expected to battle for the welterweight title sometime later this year.

Colby Covington gave his side of this ordeal on a recent episode of BJPENN.com Radio.

“It was completely to their side, they approached me looking to get a reaction out of me. Obviously, they want me to swing,” Covington told host Jason Kindschy on the show. “You know they came up to me because they’re threatened now. Now they’ve realized that I’m the guy in the way to take everything that they worked for, so of course, they’re gonna try and come to me and get me to — hopefully I’ll swing on them and lose my title shot but it wasn’t gonna happen man. All I was doing, Jason, was sitting in the buffet line trying to get some crab legs, man. Is there something wrong man? Can I get some crab legs before I get on my flight back to South Florida and all my beautiful b*****s in Miami? It’s unbelievable.

Who do you think will come out on top when Colby Covington and Kamaru Usman fight?