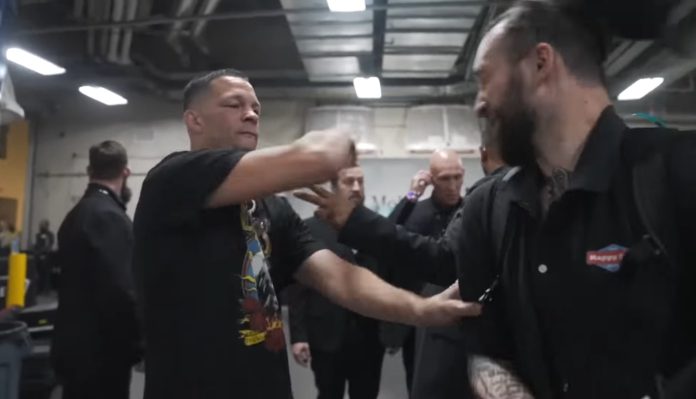 The latest victim of Nate Diaz’s Stockton slap has been revealed.

Nate Diaz is known for playing by his own rules and if something irritates him, he will let it be known. That’s exactly what happened backstage at UFC 276 in Las Vegas.

Diaz was going to be interviewed by Shawny Mack of Nelk Boys. Right when the interview started, Diaz told Mack he didn’t appreciate a recent post he made about one of his training partners.

The Stockton native then proceeded to give the reporter a slap.

Alex Behunin noted that he’s been told this was not staged.

Heard from a couple people that this was not staged https://t.co/EGQg6fCDMq

Nate Diaz may have taken issue with Mack’s Instagram post on Nick Maximov. During a recent interview, Diaz said Khamzat Chimaev can face Maximov if he wants a real test.

Mack’s video was edited to make it seem like Maximov was worried that Diaz threw him to the wolves.

The slap from Diaz was rather light and came across as more of a warning than anything else. That didn’t stop social media from blowing it up and treating it like a big deal.

Diaz is under contract with the UFC but things have been rocky between the two sides.

UFC President Dana White recently told The Mac Life that Diaz hasn’t been having much success to call the shots.

“I mean, I like Nate, let’s be honest, Nate’s won one fight in the last five years or six years, you know that. When these guys get into these positions, guys that have been with us for a long time that we respect and we care about,” White said. “You got the Cerrone’s, Anthony Pettis before he left, Nate Diaz, and Nick Diaz is still under contract with us. You want to be fair to everybody and do the right things.

“Nate isn’t going to fight Kamaru Usman, listen we are trying to do the best we can, trying not to shit on anybody and disrespect anybody. It’s not like we are talking about Kamaru Usman here we are talking about Nate Diaz,” White concluded. “Nate’s won one fight in five years, so we are trying to figure this thing out with him. He probably should go on and fight Jake Paul, that’s a fight that makes sense.”