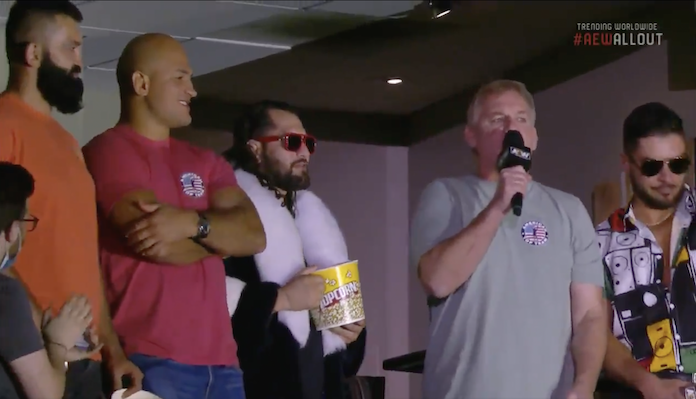 Lambert, who founded and owns American Top Team in Coconut Creek, Florida, has always been a huge pro wrestling fan, and ever since AEW was founded, he has become somewhat of a star himself for his tremendous mic skills. On Sunday night, Lambert was at the latest AEW event, and he brought with him three of ATT’s top fighters in Masvidal, the former BMF champ, and the former UFC heavyweight champions, Arlovski and Dos Santos. Although the fighters didn’t get a speaking role, they all received a nice introduction from Lambert a pop from the fans, with Masvidal getting the most cheers of any of the fighters.

Ever since Lambert started appearing at the AEW events, he has started to bring fighters from ATT with him for somewhat of a crossover. Although none of these MMA or UFC fighters have fought in AEW yet — with the exception of CM Punk, of course — there is always the chance that Lambert is helping them get some exposure to the world of pro wrestling for when their MMA careers end. Masvidal, in particular, could obviously be a huge star in the world of pro wrestling due to his mic skills and brash personality. However, he’s still in the midst of his MMA career. Either way, it looks like the three ATT fighters enjoyed being at the event with Lambert, and AEW continues to grow as a promotion.

Do you think Jorge Masvidal, Andrei Arlovski, and Junior dos Santos will try their hand at pro wrestling once their MMA careers are over?