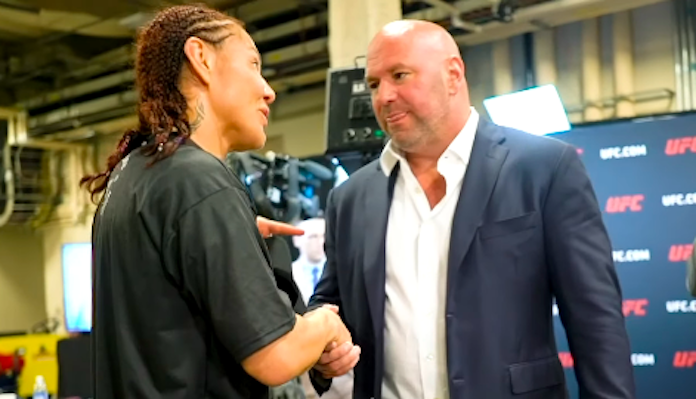 UFC President Dana White has had plenty to say about Cris Cyborg of late, primarily with respect to a potential rematch between Cyborg and Amanda Nunes. Despite the fact that Cyborg has been vocal about her desire for this rematch, White claims she doesn’t actually want the fight.

In response, Cyborg has repeatedly called White a liar in the media.

“I’m just laughing,” she told MMA Junkie at UFC 240 media day. “Everything Dana says is a lie. Everything is a lie. I just keep (focus) on myself and keep doing what I’m doing. I know the truth is going to come out.

“I always speak the truth, I never lie about anything,” she added. “He’s always lying.”

Shortly after Cyborg defeated Felicia Spencer at UFC 240 — a win that drew some criticism from White — she confronted the UFC boss backstage, and told him to stop lying about her.

The exchange was captured on video by Cyborg’s team and posted on her official YouTube channel.

“We have to talk,” she said. “You know I text you for the rematch. You know this. Stop lying about this.”

“I’m not lying about it,” White said.

“I don’t know if you know how it played out with management, what happened,” White said, attempting to defuse the situation. “We want to do the fight. I want to do that fight right now, we’ll do it. We’ll get it done.”

With her UFC 240 fight in the books, Cyborg has finished her current UFC contract. While White sounds interested in scheduling her for a rematch with Amanda Nunes, there is really no telling where she’ll end up just yet. This guy certainly seems interested in her services.

Do you think Cris Cyborg and Dana White can get past their issues and strike a new deal?