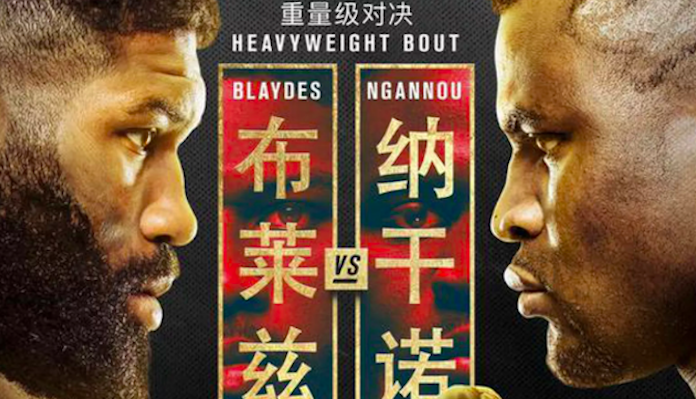 The next UFC event on the calendar is UFC Beijing, which goes down this Saturday morning in Beijing, China.

This UFC Beijing card will be headlined by a heavyweight rematch between top contender Curtis Blaydes and former title challenger Francis Ngannou.

The pair first met in August of 2016. On the night of their first encounter, Ngannou defeated Blaydes by doctor stoppage. Since then, Blaydes has not lost, defeating Cody East, Daniel Omielańczuk, Alexey Oleynik, Mark Hunt, and most recently, Alistair Overeem. Ngannou, meanwhile, followed his defeat of Blaydes with wins over Bojan Mihajlović, Anthony Hamilton, Andrei Arlovski, and Overeem. He then came up short in a title fight with Stipe Miocic, before losing a forgettable fight with Derrick Lewis in his last outing.

Elsewhere on the card, we’ll see appearances from a number of China’s top fighters.

Here is the UFC Beijing card as it currently stands.

Which fight on the UFC Beijing bill are you most excited for?