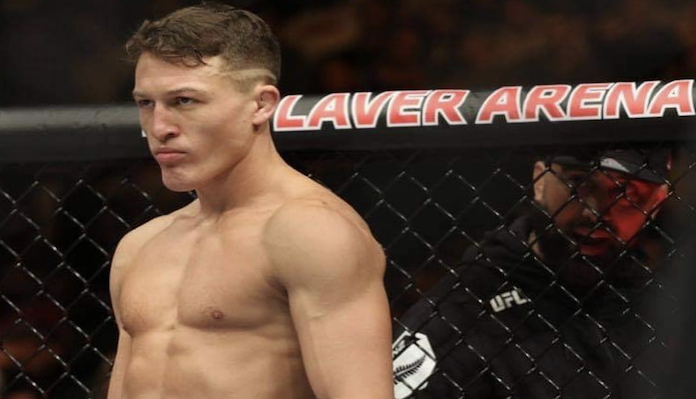 UFC featherweight Shane Young has been pulled from his fight with Omar Morales at next weekend’s UFC 260 card due to COVID-19 protocols.

Young vs. Morales would have been a great fight between two men who likely would have stood and traded for the fans’ delight, but the fight has been scratched from UFC 260. On Saturday night, it was revealed that UFC featherweight champion Alexander Volkanovski was pulled from his upcoming title fight against Brian Ortega at UFC 260 after testing positive for COVID-19. In addition, lightweight Brad Riddell saw his fight with Gregor Gillespie canceled for UFC Vegas 22 because of his closeness to Volkanovski. It appears now that Young, another City Kickboxing fighter, was affected by COVID-19 protocols.

C. Contreras Legaspi first reported the news that Young vs. Morales was off the UFC 260 card. A source confirmed to BJPenn.com that Young was indeed removed from the card and that the UFC is now looking for a replacement opponent to step in on short notice.

Following cancellation of Brad Ridell and Alexander Volkanovski fights, also Shane Young is out of the Omar Morales bout for #UFC260, promotion looking for a replacement.

Following cancellation of Brad Ridell and Alexander Volkanovski fights, also Shane Young is out of the Omar Morales bout for #UFC260, promotion looking for a replacement.

The Young vs. Morales fight was going to be a good one, so it’s disappointing that it’s off the card. In addition to the Volkaovski, Riddell, and now Morales fights all being canceled, there have been some whispers on social media that lightweight Jamie Mullarkey could also be at risk of being pulled, though that’s not confirmed yet. Mullarkey, who takes on Khama Worthy at UFC 260, has been doing some training with City Kickboxing fighters, so it’s possible he could also have been exposed to COVID-19. Hopefully, that’s not the case and the Mullarkey vs. Worthy fight can stay on the card, but it’s worth mentioning either way.

Who do you want to see replace Shane Young against Omar Morales at UFC 260?