The official fight card and lineup for next month’s UFC 259: ‘Blachowicz vs. Adesanya’ event was released on Saturday night.

UFC 259 is set for March 6 in Las Vegas and features a total of three title fights.

Adesanya (20-0 MMA) will be returning to action for the first time since handing Paulo Costa his first career loss at UFC 253. The victory marked Israel’s second career title defense and ninth win under the UFC banner.

Meanwhile, Jan Blachowicz (27-8 MMA) will enter his UFC 259 title fight with ‘Stylebender’ on a four-fight winning streak. The Polish standout was last seen in action at UFC 253, where he scored a second round TKO victory over Dominick Reyes to claim the promotions vacant light heavyweight title. 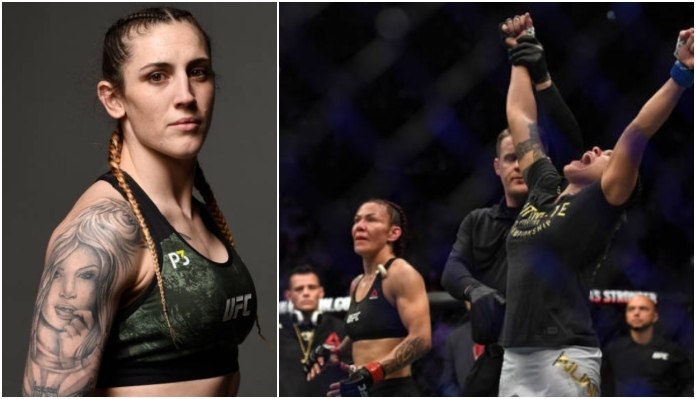 Nunes (20-4 MMA) will be returning to action for the first time since June’s UFC 250 event, where she successfully defended her featherweight title with a unanimous decision victory over Felicia Spencer. That win marked her eleventh in a row and eighth consecutive UFC title defense.

As for Megan Anderson (11-4 MMA), the Australian standout will enter UFC 259 sporting a two-fight win streak, her latest being a first round knockout victory over Norma Dumont. Anderson has gone 3-2 since joining the UFC ranks in June of 2018.

Yan (15-1 MMA) will be looking to earn his first career title defense when he squares off with Sterling on March 6. The Russian standout captured the vacant bantamweight title this past July by scoring a fifth round TKO victory over MMA legend Jose Aldo.

Meanwhile, Aljamain Sterling (19-3 MMA) will enter UFC 259 sporting a five-fight win streak, his latest being a first round submission victory over Cory Sandhagen. ‘Funkmaster’ has not suffered defeat since December of 2017 when he was brutally knocked out by Marlon Moraes.

Get the full lineup for next month’s pay-per-view event below.

Who are you picking to win the three title fights at UFC 259? Share your thoughts in the comment section PENN Nation!