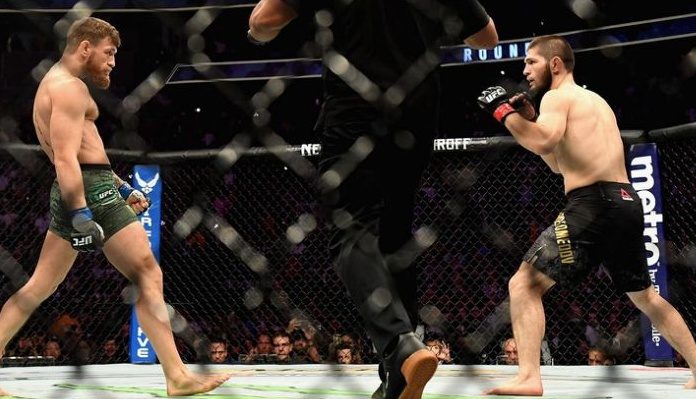 This Saturday, in the main event of UFC 242 in Abu Dhabi, UFC lightweight champion Khabib Nurmagomedov will attempt to defend his title against interim champion Dustin Poirier.

Ahead of this blockbuster lightweight battle, the UFC has opened up its vault and released the entire Khabib Nurmagomedov vs. Conor McGregor fight from UFC 229 in October.

Relive this fight, which went down as the biggest and most lucrative in UFC history, below:

Although the closing odds for this fight were quite close, Khabib Nurmagomedov ended up dominating the fight. McGregor arguably won the third frame, but Nurmagomedov was a force of destruction in rounds one and two, and he ultimately finished the fight in the fourth-round, forcing is Irish rival to tap with a neck crank.

Unfortunately, the fighting continued once this contest was over, as Nurmagomedov leapt over the side of the cage and attacked McGregor’s training partner Dillon Danis, sparking a brawl between their two teams.

Even today, almost a year later, the beef between these two camps is alive and well.

“Even this fight finish, not everything is finished,” Nurmagomedov told ESPN of his rivalry with McGregor last week (via MMA Fighting). “Just smash people it’s not enough. I talk about just smash only him? It’s not enough. We have to smash all his team. This is what I think before the fight. This is what I say to my team. ‘Hey, tonight, we’re going to war. This is not about fight.’

“It will never be finished. Ever. Even if we see [each other] somewhere, we’re going to fight, 100 percent. It doesn’t matter if someone go to jail or something like this. I’m not scared about this. If someone has to go to jail, they go to jail. . . They go to hospital and we’ll go to police. That’s it.”

Do you think we’ll ever see Khabib Nurmagomedov and Conor McGregor fight again?