Tyron Woodley and Dana White may have butted heads in recent weeks, but the former UFC champion does not want fight fans to get things twisted.

Woodley (19-7-1) parted ways with the UFC following four straight setbacks under the promotional banner. During that rough stretch, ‘T-Wood’ suffered losses to Vicente Luque, Colby Covington, Gilbert Burns, and Kamaru Usman respectively. Shortly after his contract had expired, Woodley signed on for a boxing match with YouTube sensation Jake Paul.

Tyron Woodley’s new venture into the world of professional boxing did not sit well with Dana White who shared the following thoughts on his upcoming bout with Jake Paul.

“I keep not wanting to do this (but) Tyron Woodley is 40 years old. He hasn’t won a fight in three years, in something that he’s actually supposed to be good at. And now he’s going to go box. How do you sell that fight? Lots of other things other than the sh*t that should matter. ‘I’m making millions of dollars, this is the biggest payday ever, Jake Paul will say mean things about me, pay your fighters,'” White told reporters following UFC 263. “It’s a bunch of BS.” 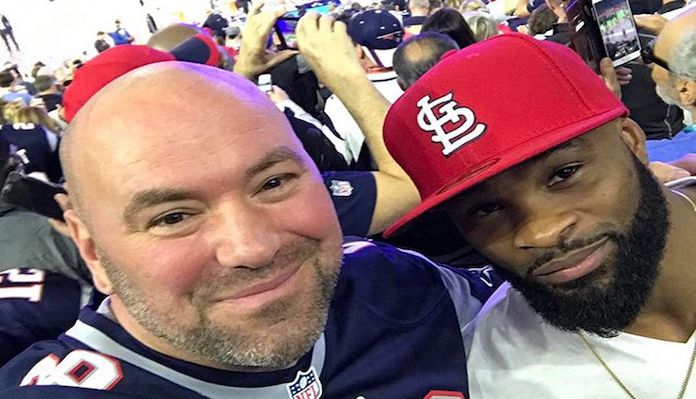 While Woodley is allegedly set to make a seven-figure payday tomorrow evening in Cleveland, he made sure to acknowledge that a slew of money also came in during his tenure with Dana White and the UFC.

“Dana White and I, we made millions of dollars together. Don’t get that twisted. Don’t think that I didn’t make a fortune in the UFC,” Tyron Woodley said on Showtime’s ALL SMOKE podcast (h/t MMANews). “But at the end of the day, God willing, it’s this time where I’m actually gonna get paid where I feel like, at this moment of my life, I’m deserving to get paid. I’m going to get paid a handsome purse. I’m gonna get paid crazy pay-per-view points because it will be the biggest pay-per-view.”

Do you think Tyron Woodley will emerge victorious when he makes his professional boxing debut opposite Jake Paul on Sunday night in Cleveland? Share your thoughts in the comment section PENN Nation!