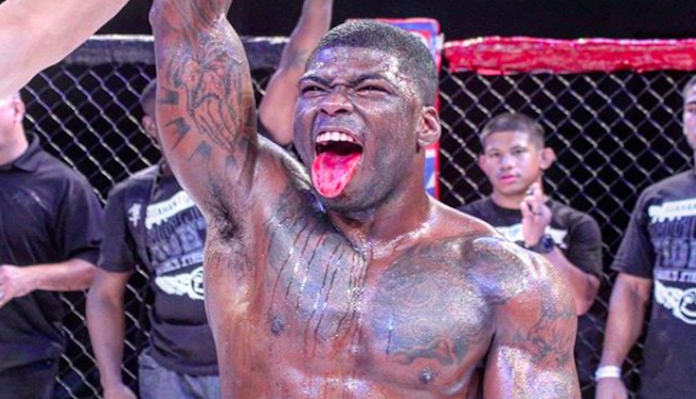 UFC bantamweight prospect Trevin Jones had his TKO win over Timur Valiev overturned to a No Contest after testing positive for marijuana.

Jones had one of the most amazing comebacks of the year in his UFC debut back in August when he fought Valiev. Jones took the fight on super-short notice, flying in from Guam to Las Vegas to take on Valiev, who was a massive betting favorite to win the fight. In the first round, Valiev took it to Jones, hurting him all over the head and body but not being able to put him away. In the second round, Valiev began to tire and Jones was able to take advantage of his fatigued opponent as he hammered him with strikes to win via TKO.

It was an incredible comeback and it earned Jones a $50,000 bonus for “Fight of the Night.” Life was looking for Jones until his post-fight drug test revealed he had marijuana in his system. As such, the Nevada State Athletic Commission has suspended him for four-and-a-half months, fined him $1,800, and most importantly, overturned his TKO win over Valiev to a No Contest. Nolan King of MMAjunkie.com reported the bad news for Jones.

Jones becomes the latest in a long list of fighters who have recently been suspended in Nevada for their marijuana usage. Other fighters who were suspended were flyweight Tim Elliott and lightweight Luis Pena, who lost to Brandon Royval and Khama Worthy in Vegas during recent events at the UFC Apex. As well, light heavyweight prospect Jamahal Hill was fined and suspended and his TKO win over Klidson Abreu was overturned to a No Contest.

Jones took to his social media on Wednesday to comment on getting suspended, noting that he plans on returning to the Octagon in January. Here’s what he wrote on Instagram.

The only thing I smoked was my opponent!! Thank you @ufc for investing in me. I’ll see you guys out there in January. #trev5starjones #newmoney #supersayianshot

It is also worth noting that the UFC may consider taking back the $50,000 bonus Jones won due to his failed drug test. In 2013, Pat Healy had two bonuses worth $130,000 taken back after testing positive for marijuana. However, that will be at the UFC’s discretion, and if you ask most fans and media, the UFC should be lenient considering it was just weed.

Do you agree or disagree with Nevada suspending fighters such as Trevin Jones and Tim Elliott for marijuana use?