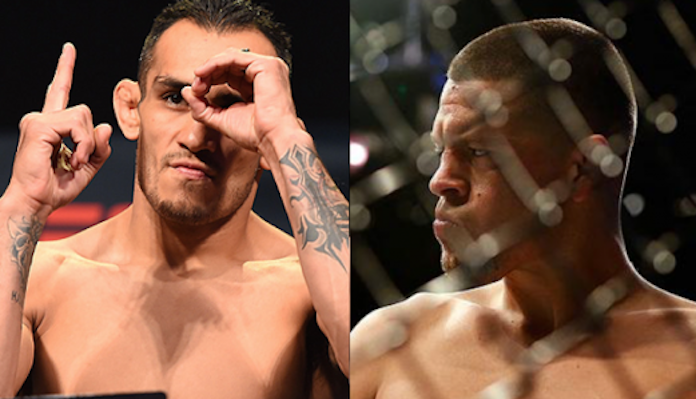 Tony Ferguson went off on Nate Diaz, Ali Abdelaziz and Conor McGregor this evening. But it was the Stockton native who received the most attention.

The event, which takes place at the Toyota Center in Houston, is headlined by a fight between Michael Chandler and Charles Oliveira for the promotions vacant lightweight title.

Given the blockbuster fights listed above, it came as no surprise that tickets for UFC 262 sold out in mere minutes.

Diaz had previously boasted about the event selling out so fast, something that obviously struck a nerve with ‘El Cucuy’.

Tony Ferguson took to Twitter late this evening where he unloaded on Nate Diaz while proclaiming the ‘Stockton Slugger’ to be his “bitch”.

“Nathans my Bitch, Fatheads managers a snitch, and Mcnuggets is jockin’ everyone’s sauce’. We all really know why the fight sold out in minutes!!!! # UFC 262 Countdown Filming A Success.” – Ferguson wrote.

Tony Ferguson will enter his bout with Dariush in hopes of snapping the first two-fight losing streak of his career. The 37-year-old was most recently defeated by Charles Oliveira in a lopsided unanimous decision at UFC 256.

Ferguson has been training with the likes of Georges St-Pierre and Freddie Roach ahead of his UFC 262 bout with Dariush, so it will be interesting to see what changes the former interim lightweight title holder has made.

What do you think of the comments made by Tony Ferguson regarding Nate Diaz and next months UFC 262 event?