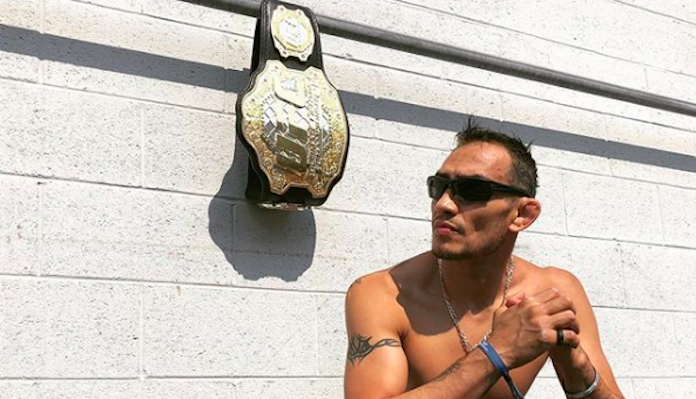 Tony Ferguson has provided an injury update after being caught in a nasty armbar during his unanimous decision loss to Charles Oliveira at UFC 256.

The UFC’s former interim lightweight champion, Ferguson (25-5 MMA), suffered his second consecutive setback, this time to ‘Do Bronx’, in the co-headliner of last months pay-per-view event.

During the lopsided loss, Oliveira caught ‘El Cucuy’ in a brutal armbar submission that appeared to stretch and likely damage some of Ferguson’s ligaments. Despite being locked in the nasty submission hold for quite some time, Tony Ferguson refused to tapout and ended up surviving the full fifteen minutes.

Ferguson recently took to social media where he provided fight fans with an update on how his arm is doing.

“It’s Tiramisu🍮Tuesday MF’s!!! That Feeling Ya Get When The Doc Says The Arm Is As Good As Iron Ahhhhhhhh Ah Ahhhhh Ahhhh Ah # Its💪🦸‍♂️👍Alright 🎶 That Type Of Guy Moment Brought To You By🥇Champ Shit Only™️ ⚔️🕶 -CSO- 🇺🇸🏆🇲🇽 # ThatIsAll 🍃🕴🍃” – Tony Ferguson captioned the video.

Prior to his recent setbacks to Charles Oliveira and Justin Gaethje, Ferguson had put together an insane twelve-fight win streak. During that impressive run, ‘El Cucuy’ scored stoppage victories over Donald Cerrone, Anthony Pettis, Kevin Lee, Gleison Tibau, Edson Barboza, among others.

Despite losing his most recent bout to Oliveira convincingly on the judges scorecards, Ferguson believes he had ‘Do Bronx’ mentally “broken” within the first five minutes of their contest.

“Right here, we’re not going to waste energy here—you guys shouldn’t either in jiu jitsu matches,” Ferguson said in a previous video. “Just be patient. Wait for the opportunity for him to get so lazy that, in the third round, he doesn’t even advance to mount anymore. What he does is he stays controlled in the side position, looking for something completely different—a different move—because he was mentally broken first round.”

What will come next for Tony Ferguson remains to be seen, but the former interim lightweight title holder is still hopeful that he can eventually score his long awaited grudge match with Khabib Nurmagomedov.

Who would you like to see Tony Ferguson fight in his next Octagon appearance after receiving a clean bill of health from his doctor? Share your thoughts in the comments section PENN Nation!