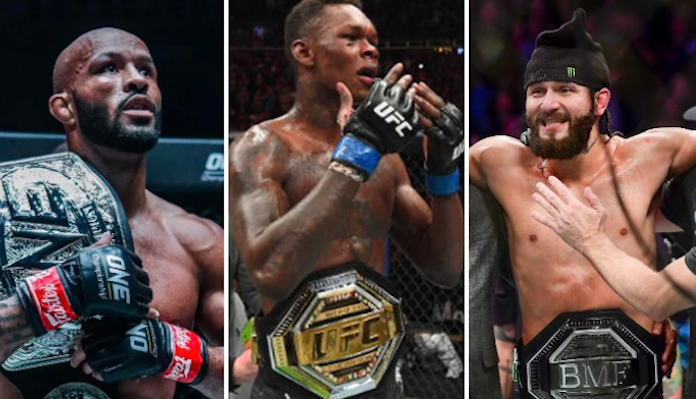 2019 was a rollercoaster ride for the world of MMA, featuring plenty of ups and downs.

As the year draws to a close, BJPENN.com looks back on 10 of the biggest MMA stories of 2019, from the good to the bad to the downright ugly.

2019 wasn’t the best year for some fighters, including the former bantamweight champion, TJ Dillashaw. In January 2019, he dropped down to 125 pounds to face flyweight champion Henry Cejudo. The decision didn’t pay off for the 33-year old as Cejudo picked up a TKO win in less than a minute.

To add insult to injury, it was subsequently revealed that Dillashaw failed his drug test for their January bout. He tested positive for human erythropoietin (EPO), which is an injection-only performance-enhancing drug. As a result, he was stripped of his bantamweight belt, lost multiple sponsorship deals and was suspended from the UFC for two years.

2019 generated a string of anti-doping controversies including Nate Diaz allegedly being flagged by USADA in the run-up to his UFC 244 fight, and Jon Jones testing positive for a banned substance metabolite for his UFC 235 bout against Anthony Smith.

In December 2019, USADA responded to this year-full of high-profile blunders by making major changes to their UFC anti-doping policies. They adjusted their leniency towards “trace-level laboratory findings to attempt to separate intentional doping cases from contaminated supplements or accidental ingestion.”

Another drop in the ocean that is MMA’s never-ending anti-doping saga.

At UFC Shenzhen in August, Zhang challenged the strawweight titleholder Jessica Andrade for the strawweight throne. The Chinese athlete had already accumulated 19 successive wins before fighting for the belt. In a shocking turn of events, the 30-year old unleashed a flurry of strikes on Andrade and sealed the TKO victory in 42 seconds of the first round.

Zhang received a herd of recognition from pros including Ronda Rousey and Dana White. Her dominant victory over Jessica Andrade reflected the rise of international fighting stars.

2019 has shown to be a great year for the sport on an international level. The UFC opened a new performance institute in Shanghai. Bellator has announced plans for rapid growth in the European market and is working closely with MMA coach, John Kavanagh to nurture European talent. Also ONE Championship conquered Japan with two blockbuster events in Tokyo.

The emergence of new competition for the UFC outside of the US borders is travelling full steam ahead into 2020 and should see more international events than ever before.

Arguably the most iconic MMA moment of 2019 was Jorge Masvidal’s infamous flying knee against Ben Askren during their UFC 239 bout.

The weeks leading up to the July bout were filled with insults and verbal exchanges from both fighters. “Gamebred” anticipated an early takedown attempt from the Olympic wrestler he’d been matched up with. His predictions came true, as Askren went for an early takedown at the beginning of their fight.

Masvidal perfectly counteracted Askren’s immediate takedown attempt with a flying knee. As soon as Masvidal’s leg connected with the face of Askren, his opponent crashed unconscious to the floor. The speedy exchange finished the fight as soon as it started and rewarded Masvidal a record-shattering 5-second first-round victory.

His show-stopping performance put an end to Askren’s undefeated record. Not only did it destroy the unbeatable perception of the former welterweight champion, but it also changed the perception of Jorge Masvidal. After UFC 239, Gamebred’s perception transformed from a streaking journeyman into one of the most deadly opponents in the welterweight division.

ONE Championship’s 100th show, which went down in Tokyo, Japan, featured Demetrious Johnson attempting to win the ONE Championship Flyweight World Grand Prix.

After beating Yuya Wakamatsu and Tatsumitsu Wada in the quarter and semifinals, Johnson positioned himself as a finalist in the Grand Prix final opposite Team Lakay stud Danny Kingad. Johnson delivered a masterful performance against his game opponent, utilizing his superior wrestling to accomplish a unanimous decision victory. In the process, he won the eight-man competition and broke Kingad’s six-fight win streak.

2019 was a busy year for “Mighty Mouse” as the Grand Prix format forced him to rack up three fights in a short period — the first time he’s done so since 2013.

By winning this ONE Championship Grand Prix, Johnson reaffirmed himself as one of the best pound-for-pound fighters in the world — perhaps the best outright — and set himself up for a flyweight title fight with the champ Adriano Moraes.

For the first time in UFC history, a new belt was added that existed outside of traditional championships. The new belt was born out of a call out from Nate Diaz following his UFC 241 Antony Pettis victory, with which he targeted Jorge Masvidal. UFC President Dana White responded with the creation of the “Baddest Motherf*cker Belt.”

Masvidal and Diaz collided for the BMF title in the main event of UFC 244 in November. Due to a severe cut above Diaz’s eye, the fight was stopped somewhat anti-climatically after the third round. “Gamebred” was awarded the victory and the BMF title. Dana White revealed that the BMF belt was a one-off, but its greatness will go down in the UFC history books.

The Rise of Israel Adesanya

2019 was a great year for the current middleweight champion Israel Adesanya who made leaps and bounds in his MMA career. The undefeated star got off to a great start by defeating MMA royalty, Anderson Silva via unanimous decision in the main event of UFC 234 in February. He had the same success when he faced heavy hitter Kelvin Gastelum at UFC 236. “The Last Stylebender” won his first five-round fight against Gastelum by unanimous decision, earning him the middleweight interim belt and placing him in prime position for a title shot against undisputed champ Robert Whittaker.

In the highly anticipated UFC 243 main event against Whittaker, the title challenger made his Octagon entrance in style. Accompanied by an entourage of dancers, Adesanya busted out moves worthy of a Michael Jackson music video. His Octagon performance also lived up to expectation, as Adesanya flattened Whittaker with a jaw-dropping knockout at 3:33 in the second round. This solidified the Nigerian-born Kiwi’s rise to the top of the UFC middleweight division.

The former UFC, Strikeforce and Invicta featherweight champion Cris Cyborg has had a career full of twists and turns. 2019 was no exception, as Cris Cyborg parted ways with the UFC and signed a new contract with Bellator.

After losing to Amanda Nunes by first-round TKO in their 2018 bout, tensions between the former champion and Dana White were at an all-time high. The UFC kingpin had taken aim at Cyborg for allegedly avoiding a Nunes rematch, a claim which Cyborg vehemently denies. Their media spats included Dana White mocking Cyborg’s appearance and Cyborg posting tampered video footage of a conversation with White. Their disagreement culminated in Cyborg being released from the company after her last contractual fight against Felicia Spencer in July.

After considering her future as a free agent, the women’s featherweight signed a lucrative new contract with Bellator. She is looking forward to a future full of new MMA opportunities, and first on the agenda is a 2020 bout against Bellator featherweight champion Julia Budd.

After announcing his retirement from MMA in March 2019, you’d think it would be a quiet year for the Irish superstar Conor McGregor. Apparently not, as McGregor became embroiled in multiple media scandals. One of those stemmed from his punching an elderly man in a pub.

Footage surfaced of “The Notorious” sucker-punching a fellow patron after he allegedly refused to drink a shot of McGregor’s Proper No. 12 Irish Whiskey. The fighter’s other 2019 controversies include troubles include smashing a fans phone, an two accusations of sexual assault, reported by the New York Times.

More recently, McGregor has been in the headlines for a more favorable reason: a comeback fight with Donald Cerrone. Earlier this month, it was confirmed that he will be returning to the Octagon on January 18 to face Cerrone in a welterweight bout. Whether McGregor can defeat Cowboy remains to be seen, but McGregor remains undoubtedly one of the biggest stars in UFC history.

The widely renowned G.O.A.T hung up his MMA gloves once and for all in 2019. Georges St-Pierre announced his official retirement from the sport on the 21st February 2019 at a news conference in his native Montreal. The Canadian fighter exited the sport as the most dominant welterweight fighter of all time.

St-Pierre defended his 170-pound belt nine consecutive times between 2008 and 2013.  He is tied with Michael Bisping for the second-most wins in UFC history (20), only a few behind hyper-active fighter Donald Cerrone (22). The Canadian superstar also became a dual division champion after submitting Michael Bisping in November, 2017 and claiming the middleweight belt.

The MMA legend managed to step away from the sport whilst remaining on top and solidifying his legacy as the welterweight G.O.A.T.