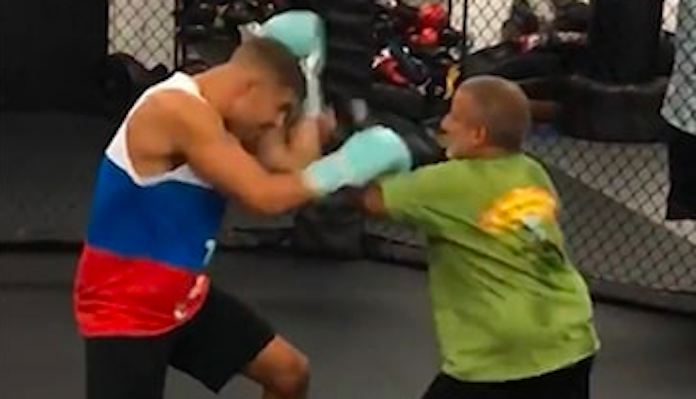 A few weeks ago, Chris Mogan became a viral sensation when the video of “The Angry Bagel Boss Guy” broke the Internet. Now he’s a viral star, and after getting beat up by a fellow bagel eater in the famous video, Morgan has enlisted the help of UFC stars Al Iaquinta and Chris Weidman to help him train for fights against other viral celebrities.

TMZ Sports posted a video of “The Angry Bagel Boss Guy” training MMA alongside Iaquinta, who was showing him the ropes in the boxing department. Weidman was the one doing the filming of the “sparring” session.

In the video, Iaquinta wraps the hands of Morgan and then even does some light sparring with him. If Morgan is serious about fighting other celebrities, then he is training with the right guys. YouTube sensation Logan Paul recently called Morgan out, and it sounds like this is a fight that could happen, as ridiculous as it may sound. Paul recently inked a deal with a boxing promoter to fight on Sept. 7, but he still needs an opponent.

If you ask Al Iaquinta, Morgan has a good chance to actually beat Paul.

“A couple of f*cking moves and you could kill that f*cker (Paul),” Iaquinta says in the video.

Morgan has absolutely no experience competing in combat sports, and if a fight against Paul does happen, he would be at a significant size and reach disadvantage.

We’ll see what happens with “The Angry Bagel Boss Guy” and his combat sports career. For now, his boxing trainers are in the news as Weidman is set to take on Dominick Reyes at UFC Boston. Iaquinta, meanwhile, doesn’t have a fight lined up, but was recently called out by Dan Hooker and it’s a fight the fans want to see.

Would you be interested in seeing “The Angry Bagel Boss Guy” fight Logan Paul?