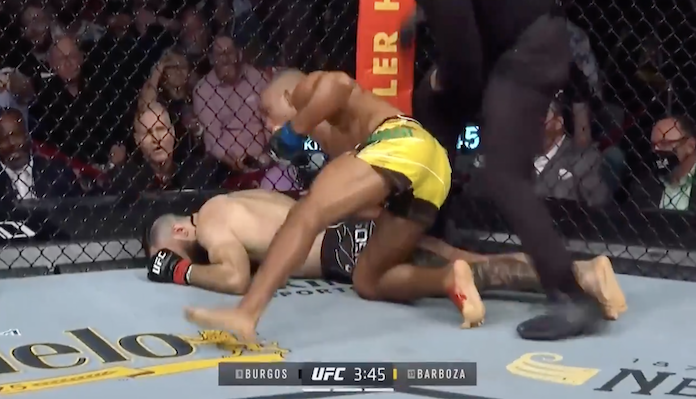 Barboza and Burgos opened up the UFC 262 pay-per-view card with an exciting “Fight of the Night” slugfest between the two highly-skilled strikers. Burgos had a lot of success with his hands early on, but Barboza was also punching back and landing some nasty low kicks along the way. It was one hell of a fight and it appeared destined to head to the judges’ scorecards, but in the third round, Barboza was able to connect with a right hand on Burgos that resulted in “Hurricane” having a delayed reaction, stumbling backwards, and falling down. Barboza immediately pounced and the fight was stopped via third-round TKO.

It was a very scary knockout and immediately there was concern that Burgos may have sustained a serious head injury in the fight. However, it appears as though he is already feeling better. Speaking to Mike Heck, Burgos provided a comment following UFC 262.

Just spoke briefly with Shane Burgos. He said he's awaiting a cat scan at the ER but he's "all good."

"I remember everything it was just a weird feeling that shut my legs off slowly. I'm 100% safe, healthy, coherent and remember it all."

Just spoke briefly with Shane Burgos. He said he’s awaiting a cat scan at the ER but he’s “all good.” “I remember everything it was just a weird feeling that shut my legs off slowly. I’m 100% safe, healthy, coherent and remember it all.”

Burgos has now lost back-to-back fights to Barboza and to Josh Emmett, and he took quite a bit of damage in both outings. The knockout against Barboza appeared to be one of those finishes that comes after a cumulative amount of damage to a fighter. It will lessen the blow for Burgos that he did win $75,000 for “Fight of the Night,” but overall it was a tough night at the office for him and it remains to be seen what will be next for Burgos.

What do you think is next for Shane Burgos after being knocked out by Edson Barboza at UFC 262?