Sean O’Malley says it is “inevitable” that he will become a UFC champion following his controversial split decision win over Petr Yan.

’Suga’ was returning to action for the first time since competing at July’s UFC 276 event, where his bout with Pedro Munhoz was ruled a no-contest due to an accidental eye poke. Prior to that inconclusive result, Sean O’Malley had earned three stoppage wins in a row over opponents Thomas Almeida, Kris Moutinho and Raulian Paiva.

Meanwhile, Petr Yan (16-4 MMA) had entered today’s contest looking to rebound from his split decision loss to Aljamain Sterling at UFC 273. Prior to that setback, ‘No Mercy’ was coming off a unanimous decision victory over Cory Sandhagen.

Tonight’s ‘Yan vs. O’Malley’ contest resulted in a three-round war that was ultimately rewarded with ‘FOTN’ honors. The opening round of the bout was closely contested but ‘No Mercy’ appeared to have a dominant second round and many thought he could be up on the scorecards 2-0 headed into the third and final frame. The final five minutes saw Sean O’Malley land some big shots but Petr Yan also landed a few takedowns. The bout went to the judges’ scorecards and ‘Suga’ was awarded the split decision win. 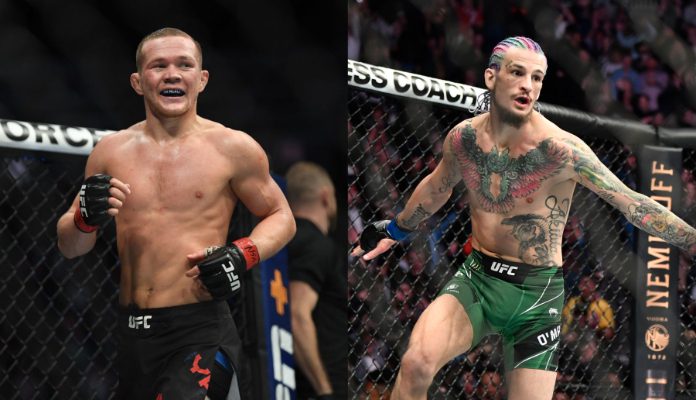 ‘Suga’ spoke to reporters about his win at today’s post-fight press conference and suggested that it is only a matter of time before he holds UFC gold.

“It’s inevitable,” O’Malley said at the UFC 280 post-fight news conference (h/t MMAJunkie). “I turn 28 (Sunday), and I’m going to be in this sport for a long time. People want me to be champ, so it’s going to happen sooner or later.”

Sean O’Malley went on to admit that he got hit more than he would have liked by Petr Yan, but ultimately feels the fight was a great learning experience to build on.

“I don’t want to get hit ever,” O’Malley said. “It’s not healthy. It’s not good to get punched on the head. It’s not good for you to have headaches. Ideally, I go in there and not get hit. But I think it makes it even sweeter, the story – I really had to show my heart.”

How did you score today’s fight between Sean O’Malley and Petr Yan? Do you think ‘Suga’ should get the next crack at reigning UFC bantamweight champion Aljamain Sterling? Share your thoughts in the comment section Penn Nation!