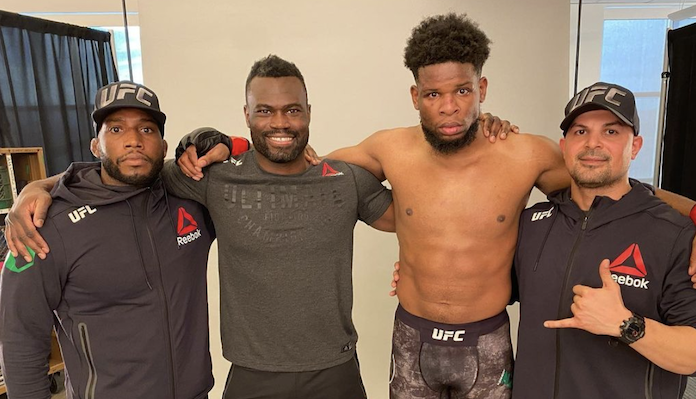 Nzechukwu, a former Dana White’s Contender Series competitor, was a big underdog against Carlos Ulberg on the UFC 259 preliminary card. Ulberg, a teammate of UFC middleweight champion Israel Adesanya, entered the UFC with a ton of hype following a KO win on the Contender Series last summer. In the fight, Ulberg absolutely dominated Nzechukwu in the first round, battering his opponent with a variety of strikes. The second round, however, proved to be Ulberg’s downfall, as he would eventually tired out, leading to an upset KO win by Nzechukwu. Statistically speaking, it was an all-time best comeback.

The victory earned both Nzechukwu and Ulberg a $50,000 bonus each for “Fight of the Night,” but it was also the kind of win that should garner Nzechukwu plenty of respect from MMA fans, who were doubting him heading into this matchup. With the win, Nzechukwu improved to 2-1 overall in the UFC, with a decision win over Darko Stosic and a submission loss to Paul Craig. Taking to social media following the fight, Nzechukwu’s coach Saud shared an incredible story about how the Nigerian had his start in mixed martial arts.

Last night Kennedy Nzechukwu showed the world what we have been seeing in the gym since day one. Kennedy came to me as a teenage kid with zero martial arts background. He walked in the gym almost ten years ago with his mom who looked at me and said “see what you can do with him”. I smiled and said, we will do our best! His mom would sit on the bench and watch him every practice. He would always glance at her when he would have some success and also look at her when he would fail. She is only about 5 feet tall but her spirit is enormous. One day she stopped coming and I would soon find out she had a severe case of ALS and couldn’t really walk much anymore. Each day he would come in the gym wearing the sorrow and pain of seeing his mother suffer. I saw this young kid become a man as he took on the role as caregiver and head of the household. He never drank or partied like the other kids. He spent his days working and doing everything he could to build a better life. Fast forward to all these years later, his mom’s condition has continued to worsen and he continues to fight the good fight for her everyday. He was a big underdog going into the fight last night. Although we who know him and how much adversity he has seen, we knew what he was capable of. We knew he could overcome anything that a mma fight could throw at him. Last night all of that hard work and dedication for a better life showed up on the biggest stage. What a win for this young man. I couldn’t be prouder of his journey and resilience. Thank you to @mickmaynard2 and @danawhite for also signing him to a new 4 fight contract in the best organization in the world @ufc. He also received the bonus for FOTN. This win means so much to our team and our Fortis mma family. We love you kid. You have become a man we are all so proud of-#congratulations #winner #ufc #champions #heart #nevergiveup #hardwork #paysoff #team #teamwork #family #mixedmartialarts #dallas #texas #fortismma

Just 28 years old and coming off of an epic KO win, it will be interesting to see who the UFC matches Nzechukwu after this comeback of a lifetime over Ulberg at UFC 259.

What do you think is next for Kennedy Nzechukwu after KOing Carlos Ulberg at UFC 259?