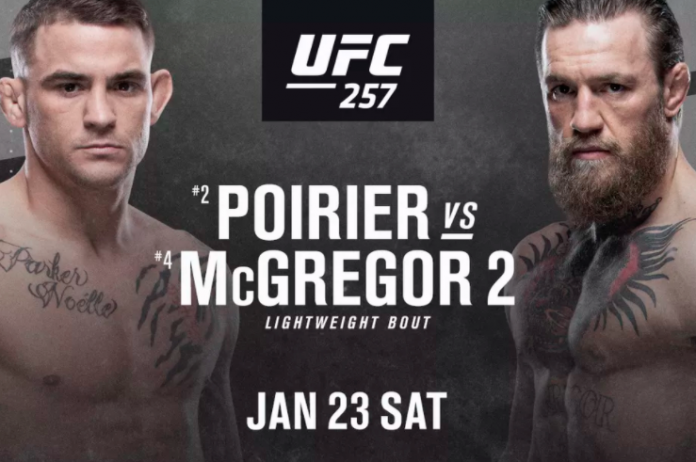 UFC president Dana White said that UFC 257: Poirier vs. McGregor 2 was on pace to be one of the biggest pay-per-view sellers of all time, and he was right. According to a report from John Ourand of SBJ, UFC 257 sold 1.2 million PPVs on ESPN+. There were another 400,000 international PPVs sold, for a total of 1.6 million PPV buys.

According to John S. Nash, a UFC financial expert, these numbers suggest that the UFC 257 pay-per-view is the second-biggest selling PPV of all time in the organization’s history. The only one that’s bigger, according to Nash, was UFC 229: Khabib Nurmagomdov vs. McGregor. That event sold 2.4 million PPVs, which is still the organizational record. But if the 1.6 million number holds up, that means that UFC 257 would be the second-biggest of all time, and that’s a huge accomplishment.

The big numbers prove that combat sports fans will still shell out the $64.99 price tag for UFC PPVs if there’s a big fight on the card, and it doesn’t get any bigger than Poirier vs. McGregor 2. The highly-anticipated rematch between the two bitter rivals had tons of hype behind it in the lead-in to the event, and it turned out to be an even better contest than anyone could have ever expected, punctuated by Poirier scoring the fight-ending blow in the second round. UFC 257 was, overall, a big home run.

There are now rumors of a potential trilogy fight between Poirier and McGregor next and, after seeing these PPV numbers, you can see why that fight is a real possibility.

Were you among the 1.6 million people who purchased the UFC 257 pay-per-view?