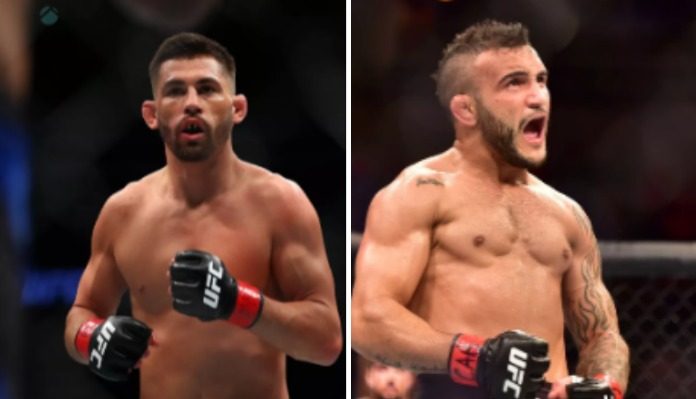 Just when you thought that UFC 233 couldn’t be getting a better building start, we get one hell of a bantamweight matchup thrown into the mix.

It will have been two years once the end of December rolls around that we’ll have seen the former bantamweight king Dominick Cruz (22-2) compete inside the Octagon.

But now we have an idea as to when we’ll see him back as Combate is reporting that a bout between Cruz and John “Hands of Stone” Lineker (31-8) is in the works for UFC 233 in Anaheim, California on January 26. Current bantamweight champion TJ Dillashaw vs flyweight champion Henry Cejudo is also expected to take place on this card as well.

Cruz’ last fight came at UFC 207 when he attempted to defend his title against Cody Garbrandt. Unfortunately for Cruz, he would suffer the second defeat of his career and the first of his UFC career.

The former champion was planning to return a lot sooner than 2019 as he was scheduled to face Jimmie Rivera at the end of 2017 on the UFC 219 card. However, Cruz would break his arm in preparation for the fight and be sidelined all the way up until he was cleared just a few months ago.

In the meantime, Lineker has fought twice since UFC 207 which was an event that he also fought on when he dropped a unanimous decision to Dillashaw.

Since then the Brazilian has won two in a row with a unanimous decision over Marlon “Chito” Vera in 2017 and a third-round knockout of Brian Kelleher in May at UFC 224.

Assuming that Dillashaw vs Cejudo also takes place on this card, likely as the main event, it will probably be a safe bet to assume that Cruz will be the alternate fighter in the case that he is needed.

As for other fights that have already been made for UFC 233, we have a lightweight clash between James Vick and Paul Felder as well as the highly anticipated promotional debut of “Funky” Ben Askren as he takes on Robbie Lawler.