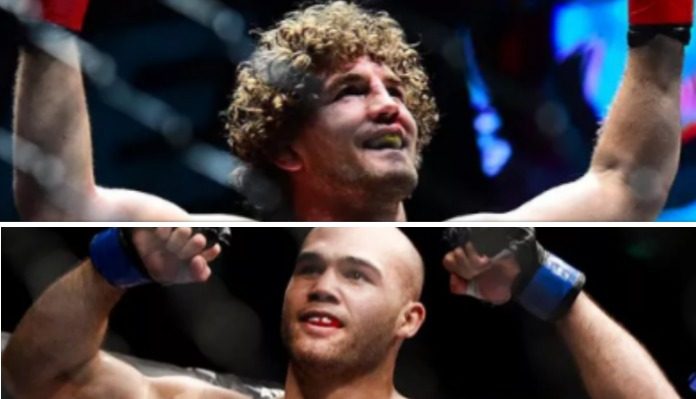 It looks like we know who “Funky” Ben Askren (18-0) will likely be making his UFC debut against and it happens to be the one guy that he hasn’t called out yet.

That opponent happens to be the former UFC welterweight champion, “Ruthless” Robbie Lawler (28-12) as ESPN’s Brett Okamoto has confirmed with UFC president Dana White that the matchup is targeted for UFC 233 in Anaheim, California on January 26

Breaking: Ben Askren vs. Robbie Lawler targeted for UFC 233 on Jan. 26 in Anaheim, per Dana White. Contracts are not signed yet from what I'm told, but UFC is working on getting it finalized. Story up soon on @ESPN.

Breaking: Ben Askren vs. Robbie Lawler targeted for UFC 233 on Jan. 26 in Anaheim, per Dana White. Contracts are not signed yet from what I’m told, but UFC is working on getting it finalized. Story up soon on @ESPN.

Funny enough, despite Askren calling out essentially everyone and anyone at the top of the welterweight division (excluding Lawler), he did say on Saturday night at UFC 230 that he thought his debut opponent would “probably” end up being the former UFC champ, Lawler.

A former champion in his previous two homes of ONE Championship and Bellator, Askren’s transition to the UFC has been something that MMA fans have been wanting for many years now and we’re finally getting it.

For Askren’s first opponent inside the Octagon Lawler, this will be his first fight since tearing his ACL in a unanimous decision loss to Rafael Dos Anjos at UFC on Fox 26 in December 2017. Prior to that fight, Lawler defeated Donald “Cowboy” Cerrone which was his first fight after dropping the welterweight title to Askren’s longtime teammate and current champion Tyron Woodley.

Askren’s last fight didn’t come too recently either as his last came in November 2017 when he defeated lightweight MMA legend Shinya Aoki via first-round TKO in just under a minute.

Who do you have in the highly anticipated debut of the Funky one? Will Lawler play spoiler or will Askren live up to the hype?