Billy Joe Saunders suffered a severe eye injury in his loss to Canelo Alvarez and his career is now in jeopardy, according to a recent report.

On Saturday night, Saunders and Alvarez took one step closer to unifying the 168-pound division. It was a massive fight and early on, Saunders had success. Yet, as the fight wore on, Alvarez started to go to the body and then landed a beautifully timed uppercut that landed flush on the eye of Saunders.

Immediately, Saunders’ eye started to swell and in between the eighth and ninth round, his corner called the fight. It appeared that Saunders broke his orbital and after the fight, he was rushed to the hospital and had surgery.

It looked bad on TV, and Eddie Hearn revealed to The Athletic that Billy Joe Saunders suffered a quadripod fracture and faces several months of recovery. Yet, the promoter says he isn’t even sure Saunders will be able to return.

“He’s going to be out for a long, long time,” Eddie Hearn commented after the fight. 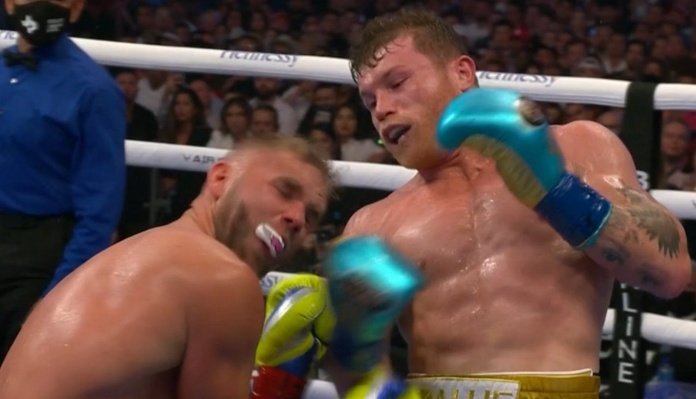 After the fight was called off, many said Saunders quit. Yet, according to his trainer, Mark Tibbs, he says he was the one who stopped it as he wasn’t letting his fighter go out there with one eye.

“His eye socket was caved in and he couldn’t see. I didn’t get the response from him so, you know,” Tibbs told Behind the Gloves about Billy Joe Saunders. “It’s frustrating, really, because I felt that he was growing into it. But I had to pull it. He never said, ‘No, that’s it,’ he left it to me. He took it well, but he was in pain. The eye socket was gone and he was in pain.”

With the loss, Billy Joe Saunders is now 30-1 as a pro and lost his WBO super-middleweight title.

What are your thoughts that Billy Joe Saunders’ career might be over after his loss to Canelo Alvarez?