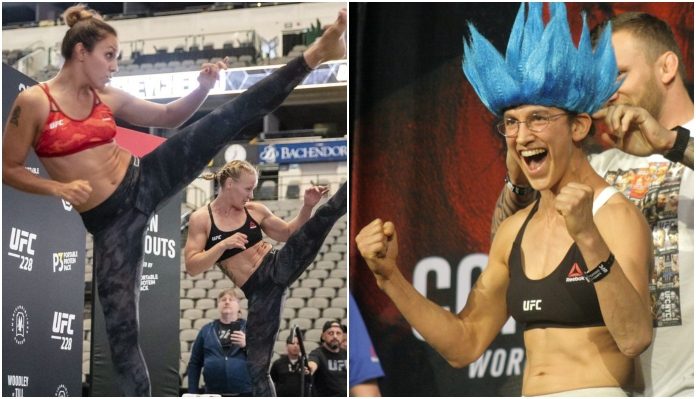 The Shevchenko family has made UFC history. The sister tandem of Valentina and Antonina (7-0) are officially the first of sisters to have ever fought together inside the organization.

For the older sister, Antonina, she is actually the newcomer to the promotion as she most recently made her promotional debut at The Ultimate Fighter 28 Finale in November 2018 when she defeated Ji Yeon Kim via unanimous decision.

Originally, the UFC had planned for Shevchenko to get right into the contender mix as they matched her with the top 15 ranked Ashlee-Evans Smith. Unfortunately for Smith, she would suffer an injury thus leading to Kim replacing her.

However, for her sophomore appearance, the UFC seems to be wanting to speed up that progression even further.

According to MyMMANews, a bout between Shevchenko and the No. 8 ranked flyweight contender and former title challenger, Roxanne Modafferi (22-15) is in the works for the UFC’s return to Russia on April 20 in St-Petersburg.

For Modafferi, this would be her third fight since challenging for the inaugural title in December 2017. Since then she has gone on to get redemption over former worldwide No. 1 and former Invicta FC champion, Barb Honchak before suffering a loss to Sijara Eubanks at UFC 230.

It seems like somewhat of an odd matchup to make by the UFC at this stage as Modafferi and fellow top 10 contender Katlyn Chookagian had recently verbally agreed to fight. Thus making it a matchup that literally set itself up.

As for the multiple time Muay Thai champion, Antonina Shevchenko, this will be by far her toughest test to date in her young MMA career as stylistically, Modafferi has all the expected grappling advantages.

Currently, UFC St-Petersburg is expected to have two heavyweight bouts on the lineup. One of which that is expected to feature Sergey Pavlovich taking on Marcelo Golm with the other believed to be the headliner between Alistair Overeem and Alexander Volkov.