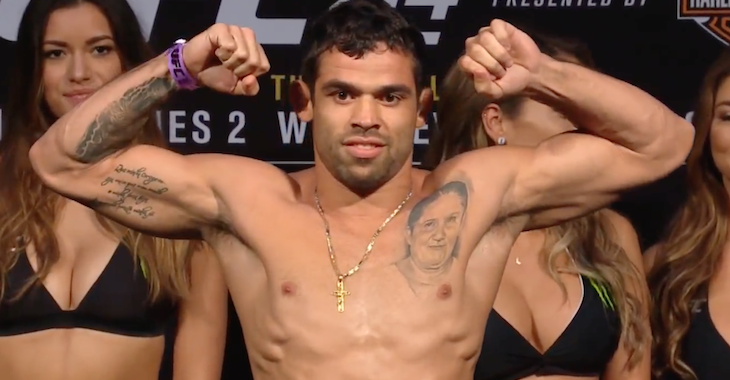 SBC recently announced the signing of Barao to a multi-fight deal. Here’s the statement the promotion released on Instagram regarding Barao’s arrival.

SBC’s statement on signing Barao is as follows: “Whave a little special guest and an incredible and rare honor to host former UFC World Champion, MMA sports legend Renan Barao! @renanbaraoufc ‌Renan is a former UFC bantamweight champion who has held one of the longest winning streaks in MMA sports history – 32 consecutive wins! While being the UFC World Champion he was ranked in the top three pound-for-pound fighters and was considered one of the best MMA fighters on the planet! Renan has signed a contract for multiple fights for appearances at Serbian Battle Championship Revenge events!”

Barao (34-9, 1 NC) was recently released by the UFC after losing five fights in a row. Barao has actually lost eight of his last 10 fights overall, including his recent losing skid that culminated in a low point after losing to Douglas Silva de Andrade and getting cut. Between 2012 and 2014, Barao held the UFC bantamweight title and was highly regarded in the pound-for-pound conversation.

Barao now joins the emerging Serbian Battle Championship roster, which also has former UFC castoffs Junior Albini and Fabio Maldonado on its roster. The promotion has been willing to spend money to bring in overseas talent, and despite not being the same fighter he once was, Barao is still a big name that will surely attract MMA fans to watching the promotion’s fights.

SBC hasn’t announced who Barao will fight in his promotional debut and likely won’t until the coronavirus pandemic is over. The promotion could sign another “name” free agent to fight him, or perhaps match up a prospect the organization is high on against Barao. Although little can be expected from Barao given his recent form, perhaps he can defy the odds and rebound from his brutal skid in the UFC with SBC.

UPDATE: Renan Barao on Sunday said that he is denying signing a contract to fight for SBC despite the promotion making the announcement (via Globo).