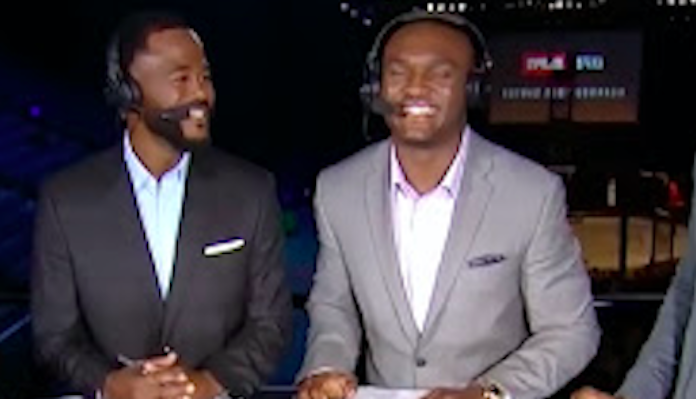 MMA analyst Rashad Evans said that UFC welterweight champion Kamaru Usman is no longer part of Sanford MMA as far as the team is concerned.

Evans is part of the Sanford MMA team alongside the likes of UFC lightweight Michael Chandler, veteran Robbie Lawler, and welterweight contender Gilbert Burns. A former member of the team was Usman, but he left the team last year knowing that he would be fighting Burns next. Usman has been working in Colorado with coach Trevor Wittman in preparation for his upcoming fight at this weekend’s UFC 258 against Burns, who has remained loyal to Sanford MMA.

While it hasn’t been stated explicitly if Usman was permanently done with Sanford MMA, that looks like it’s the case. Speaking to the SiriusXM Fight Nation, Evans — who also works alongside Usman on ESPN — said that the fighters down at Sanford MMA don’t consider Usman part of the team anymore.

“Honestly speaking, before this happened, they were kind of already going on different paths as far as like Kamaru was already trying to train at other places, you know what I’m saying? So I think when it comes down to, the move is already made as far as the team is concerned. The team wanted a champion and they felt like they didn’t know whether they’d have Kamaru, so now they have Gilbert. I think, for the most part, people still feel connected to Kamaru, but I feel like maybe the team wants their teammate Gilbert to win. Kamaru’s not part of that team no more, to be honest,” Rashad Evans said.

The fact that Usman and Burns were former training partners adds yet another wrinkle to what is already a fascinating title fight between Usman and Burns this weekend at UFC 258 in Las Vegas. Of course, you can never say the door is shut for good. But as Evans saw firsthand when he left Team Jackson – Wink after that team went with Jon Jones instead, sometimes bridges can’t be mended.

Do you think Kamaru Usman will remain with Trevor Wittman going forward to will he look to join a bigger camp?