Former UFC lightweight champion Rafael dos Anjos had made it clear that he is interested in fighting Justin Gaethje his next time out.

Dos Anjos (30-13 MMA) returned to the promotions lightweight division back in November, where he picked up a thrilling ‘fight of the night’ split-decision victory over Paul Felder.

With his eyes now set on reclaiming the 155-pound throne, ‘RDA’ is looking for a top contender in his next Octagon appearance.

With that being said, Rafael’s options are currently limited, as Michael Chandler and Charles Oliveira are already booked to fight for the vacant lightweight strap, this while perennial contenders Conor McGregor and Dustin Poirier are set to collide in a trilogy fight on July 10. 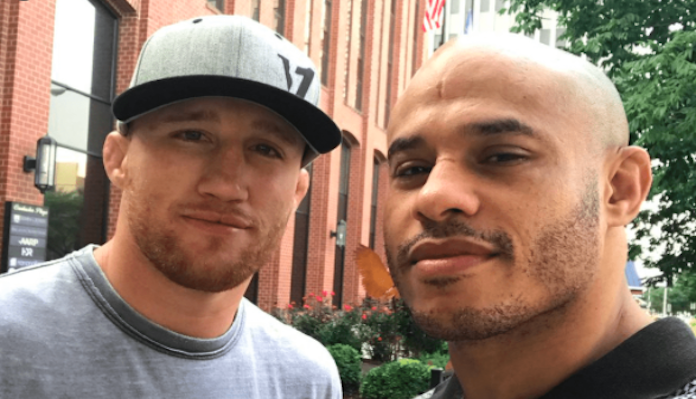 One man that currently is available for a fight booking is former interim lightweight title holder Justin Gaethje.

Gaethje’s manager Ali Abdelaziz recently proclaimed that the Top-5 of the UFC’s lightweight division were all “running” from his client.

Rafael dos Anjos used Ali’s recent comments to put forth a challenge to ‘The Highlight’.

Guess who’s the highest ranking available? I’m on it. Send me the contract. https://t.co/yT3CC9wHGo

A fight between Rafael dos Anjos and Justin Gaethje would no doubt equal fireworks. Both men are known for their willingness to stand and trade inside of the Octagon.

Gaethje (22-3 MMA) has not stepped foot in the cage since suffering a submission loss to Khabib Nurmagomedov in his bid for the undisputed lightweight world title at UFC 254.

Prior to that setback, ‘The Highlight’ was coming had earned four consecutive stoppage wins, defeating the likes of James Vick, Edson Barboza, Donald Cerrone and Tony Ferguson in that stretch.

Would you like to see UFC officials book a lightweight bout between Rafael dos Anjos and Justin Gaethje next? Share your thoughts in the comment section PENN Nation!