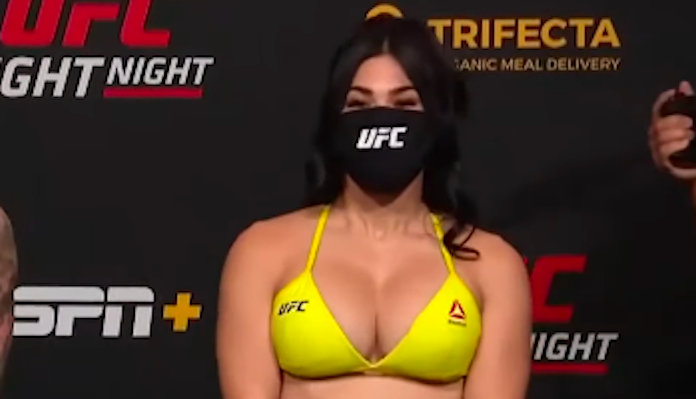 UFC flyweight Rachael Ostovich has been released from her contract with the Las Vegas-based mixed martial arts promotion.

News of her release from the UFC roster was first reported by MMA Junkie.

Ostovich returned to the cage at UFC Vegas 15 late last month, when she was stopped a volley of third-round punches from Gina Mazany. That loss pushed her onto a three-fight skid, as she was submitted by Paige VanZant and Montana De La Rosa in her next most recent fights. She’s now a tough 4-6 as a professional mixed martial artist.

While this news will certainly come as a disappointment for Ostovich fans, she seemed to recognize her release from the UFC was a near certainty if she failed to get by Mazany. She also seemed prepared to continue her MMA career outside the UFC if need be.

“The plan is to stay in MMA and the UFC,” Ostovich said at the virtual media day for  UFC Vegas 15. “I’m not saying this is my last fight, I just think that another loss—three in a row—that won’t be good. I know how that looks, and I’ve seen people get cut for way less. That’s how I look at things.

“MMA, I’ve been doing it for ten years, it’s what I love to do,” she added. “If they decide to keep me, even after a loss—which is not gonna happen—I’ll be grateful too. You kind of have to black out the haters. I’m doing what I love to do in the best show in the world.”

At the time of this writing, Ostovich has not spoken at length about her UFC release, but she did seem to hint at it in her latest Instagram post.

“Every end is a new beginning,” she wrote.

Do you think it was fair of the UFC to cut Rachael Ostovich?