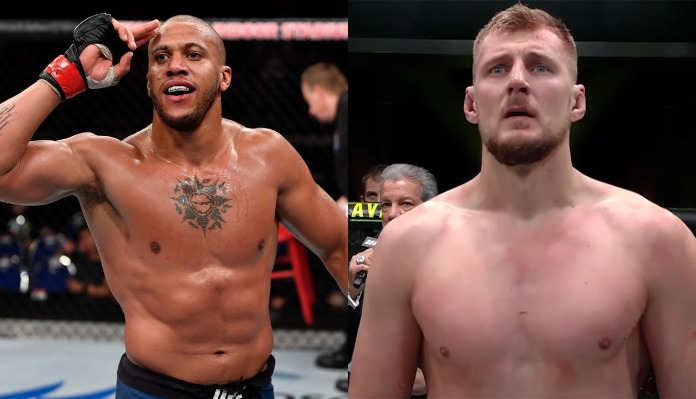 Gane (9-0 MMA) was looking to keep his perfect record intact when he took to the Octagon this afternoon. The Frenchman was coming off a unanimous decision victory over Jairzinho Rozenstruik in his most recent effort, which had been preceded by a TKO victory over former UFC champion Junior dos Santos.

Meanwhile, Alexander Volkov (33-9 MMA) entered today’s UFC Vegas 30 headliner on a two-fight winning streak, this after scoring TKO victories over Walt Harris and Alistair Overeem in his most previous efforts. The former Bellator heavyweight champion had gone 7-2 since joining the UFC ranks in November of 2016 prior to tonight’s main event.

Tonight’s UFC Vegas 30 headliner went the full twenty-five minutes. During which time Ciryl Gane was able to get the better of Alexander Volkov for the majority of the five-round main event. The Frenchman showcased his elite level striking throughout the contest and ultimately was rewarded with a unanimous decision victory from the judges in attendance.

Check out how the pros reacted to Gane vs. Volkov below:

Just the facial expressions alone are telling a lot in this fight. #UFCVegas30

Gane found his rhythm. He is pushing up the pace now. Impressive #ufcvegas30

Ciryl Gane remains undefeated. Dominant UD win over the veteran Alexander Volkov. He’s likely 1-2 dubs away from a title shot at this point.

Ciryl Gane is climbing the ranks while taking very little damage. Very impressive to do at heavyweight #UFCVegas30

Who would you like to see Ciryl Gane fight next following his decision victory over Alexander Volkov this evening in Nevada? Share your thoughts in the comment section Penn Nation!