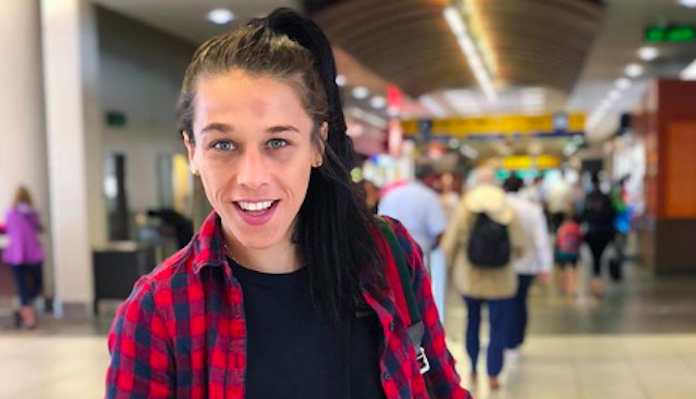 What’s next for the winners of Saturday night’s UFC Tampa card? We take a look in the latest edition of Playing Matchmaker.

The main event saw Joanna Jedrzejczyk get back into the win column with a dominant five-round decision win over Michelle Waterson. Jedrzejczyk needed the win after losing three of her last four fights, and it’s a victory that should earn her a title shot against new UFC women’s strawweight champion Weili Zhang. Jedrzejczyk and Zhang are both exceptional MMA fighters and this would be an incredible title fight between two elite-level strikers.

It shouldn’t surprise anyone that Cub Swanson won another “Fight of the Night” award for his war with Kron Gracie. The win snapped Swanson’s four-fight win streak and should edge him closer to getting back into the top-15. Ryan Hall is currently ranked No. 14 and is a similar-style fighter to Gracie. Let Swanson fight Hall and try to earn his way back in to the rankings in what could potentially be another FOTN contender.

Maybe the most brutal knockout on a card full of them saw Niko Price finish James Vick with an upkick in devastating fashion. Win or lose, Price is one of the most exciting welterweights on the UFC roster and he’s earned a step up in competition. Robbie Lawler recently lost Santiago Ponzinibbio as an opponent at UFC 245. Although Price said he wants to take the rest of the year off, it would be hard for him to turn down a fight against a veteran like Lawler who’s ranked in the top-15. Price vs. Lawler is the fight to make.

One of the upsets on the card saw Amanda Ribas defeat highly-touted Mackenzie Dern via unanimous decision. It was a great performance for Ribas, who is now riding a two-fight win streak. The UFC women’s strawweight division is always looking for fresh contenders, so let’s give Ribas the opportunity to fight a ranked opponent. Karolina Kowalkiewicz is the lowest-ranked top-15 fighter without an opponent, so let Ribas fight her next.

An exciting lightweight bout saw Matt Frevola edge out a very close split decision win over Luis Pena for his second straight victory. It was a super close fight, but Frevola got the job done. Marc Diakese is another unranked lightweight on a two-fight win streak. Frevola should fight Diakese, with the winner potentially earning a ranked opponent next.

A pair of improving middleweights picked up wins as Eryk Anders won a split decision over Gerald Meerschaert and Marvin Vettori cruised to a unanimous decision over Andrew Sanchez. It’s two wins in a row for both Anders and Vettori, who are both unranked fighters on the same fight schedule. Let them fight each other, with the winner entering the bottom end of the middleweight top-15 rankings.

What do you think of these potential matchups for the UFC Tampa winners?