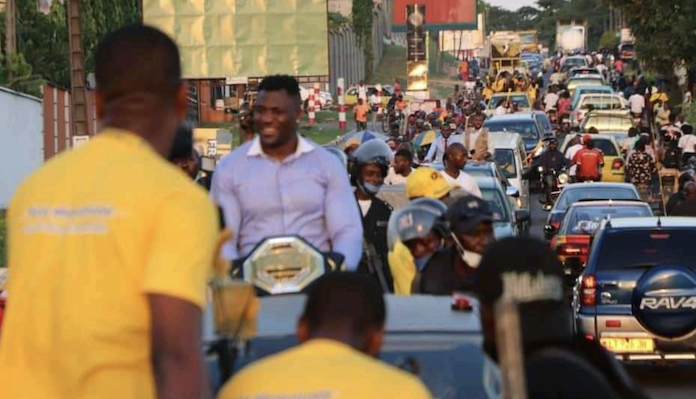 UFC heavyweight Francis Ngannou shared photos of his victory tour as he headed back home to his native Cameroon with the heavyweight belt.

Ngannou knocked out Stipe Miocic last month at UFC 260 to win the UFC heavyweight title for the first time. Following the victory, Ngannou has now gone back home to Cameroon. On Wednesday, “The Predator” took to his social media to share photos of the trip home.

This moment is something I have been waiting for. It is hard to put this feeling in to words. The belt is back home where it belongs 🏆🇨🇲 #CROWNEDCHAMP pic.twitter.com/brUwjokoIE

This moment is something I have been waiting for. It is hard to put this feeling in to words. The belt is back home #CROWNEDCHAMP

Ngannou is undoubtedly one of the UFC’s biggest stars right now and his next fight is certain to be a pay-per-view blockbuster. Fans were hoping that Ngannou would be matched up against Jon Jones in his next fight, but instead the promotion is likely going to go with Derrick Lewis instead as the UFC can’t strike a deal with Jones. Ngannou is certainly in line for a big payday either way, but the Jones fight would have been the biggest fight for both men in their career. The Lewis fight is still big, though likely won’t sell as many pay-per-views as that of a potential Jones vs. Ngannou fight.

It’s pretty remarkable what Ngannou has accomplished in his life, coming from Cameroon, going to France, and then finally reaching his dreams in North America. He is a truly special human being who is one of the best ambassadors and role models that the sport of MMA could ever ask for. Not to mention, he is an incredible fighter through and through. Over his last five fights, Ngannou has won all of them by knockout and a win over Lewis or Jones would further cement his legacy in the sport.

Are you excited for the rematch between Francis Ngannou and Derrick Lewis?