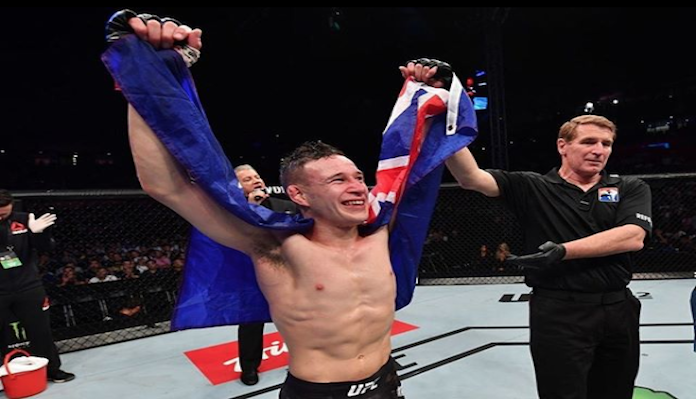 UFC flyweight contender Kai Kara-France hinted at bigger things ahead following his win at UFC Shenzhen, posing for a picture after the event with UFC president Dana White.

Kara-France defeated Mark de la Rosa via unanimous decision in an entertaining flyweight scrap on the main card to improve his UFC record to 3-0. The 26-year-old native of New Zealand improved to 20-7, 1 NC in his MMA career, and he’s currently riding an impressive eight-fight win streak overall. The UFC matchmakers seem very high on the young Kiwi.

After the event, Kara-France was all smiles standing next to the big bossman White. Here’s what “Don’t Blink” said on his Instagram page.

Kara-France’s performance against de la Rosa clearly impressed White, who has a huge smile on his face in the picture. The UFC flyweight division has recently experienced a revival following Henry Cejudo winning the title and Kara-France is currently one the top contenders in the world for the 125lbs belt.

In a related Instagram post, Kara-France said that he would like to fight at UFC 243, which takes place October 5 in Melbourne. That makes perfect sense for France’s next fight considering it’s close to home for him. He didn’t take much if any damage against de la Rosa and should be ready to go for that card if the UFC deems him acceptable.

Kara-France also said that he is interested in a rematch against Alexandre Pantoja, who defeated Kara-France on “The Ultimate Fighter” a few years ago. Kara-France hasn’t lost since then, while Pantoja has turned into one of the top flyweights in the UFC.

We’ll see if Kara-France gets his way, but judging by White’s reaction in the photo above, one can only imagine the UFC president likes the idea of Kara-France having a quick turnaround and fighting on the Melbourne card.

Do you want to see Kai-Kara France vs. Alexandre Pantoja 2 at UFC 243?