Paddy Pimblett stock rose higher than ever with his KO victory at UFC Vegas 36. Pimblett was hit, and hurt, but withstood the punishment to victory, receiving a performance bonus in his UFC debut. It was a long time coming for ‘The Baddy’, seeing as he denied the UFC numerous times before finally signing with the major promotion.

You often hear the saying, “don’t throw all your eggs in one basket.” When the UFC brass come calling, it is not an easy decision to deny the chance at fame and fortune. Most regional fighters are making next to nothing, working multiple jobs on top of training, and have been waiting for the call most of their life. It isn’t an easy decline to make. 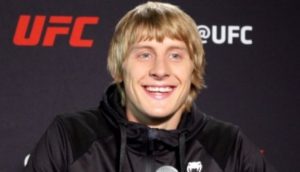 Paddy Pimblett believed it was necessary to reject the UFC’s contract offer, not once but twice. ‘The Baddy’ wasn’t looking for a UFC debut, he was looking to grow as a fighter. More often than not, regional fighters who hear their names called, don’t last more than 3 fights in the big show. While it is hard to resist an offer with the UFC, it is also hard to remain on the roster if you aren’t ready. Most know once you have been cut by the promotion, it is near impossible to return.

“When they first offered it to me in 2016, I was still fighting at featherweight,” Paddy Pimblett said. “I was still very immature. I wasn’t professional at all, still a child partying all the time. When they offered it to me again in 2018, I turned them down the second time, I wasn’t even a proper lightweight then. I was still a boy fighting men. I didn’t even have a proper team.” (Via MMA Junkie)

The Cage Warriors champion believes he wasn’t ready, ‘a boy fighting men.’ Now still at only 26 years of age, the decision seems to have paid off. Paddy Pimblett had a massive audience watching his UFC debut and his instagram following subsequently jumped to over 300K followers. Twitter was raving about the Englishman, love him or hate him, you were watching.

While it will never be easy to decline an offer to live out your dream, continuing to grow before getting to the Octagon may keep your dream a reality for a much longer period of time. Pimblett seems to have furthered proved that “getting to the UFC” shouldn’t be the dream, staying there is key.