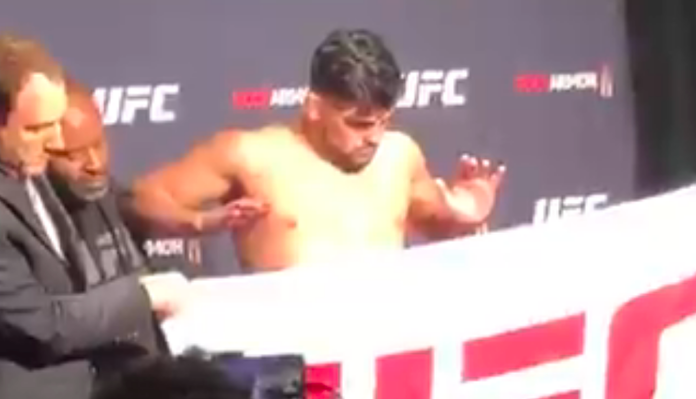 The former interim middleweight title challenger, Gastelum, required the use of a towel during today’s weigh-ins and appeared to lean on his coach while on the scale.

The footage of today’s weigh-in sparked a ton of controversy on social media and now the NYSAC has issued an official statement on the matter (via ESPN).

“The Commission has reviewed the footage available to it at this time of Mr. Gastelum’s weigh-in. The official weight determination will not be disturbed, and Kelvin Gastelum will not be disqualified from competing at UFC 244, as the possible contact indicated in the video cannot be said to have materially impacted Mr. Gastelum’s weight to the extent that it would have exceeded the applicable weight limit allowable for competition in the match. The Commission will continue to review the matter and disciplinary action will be pursued if clear evidence of contact with another person during the weigh-in process becomes evident, as any such contact is a violation of Commission policy.”

Kelvin Gastelum will square off with former welterweight title challenger Darren Till in a middleweight bout which serves as the co-headliner of tonight’s UFC 244 event in New York.

Gastelum will be returning to the Octagon for the first time since suffering a unanimous decision loss to Israel Adesanya at UFC 236.

Since moving up to the promotions middleweight ranks, ‘KG” has scored victories over Ronaldo Souza, Michael Bisping and Tim Kennedy.

As for Darren Till, the Liverpool native will be looking to snap a two-fight losing skid at UFC 244. ‘The Gorilla’ is coming off a brutal knockout loss to Jorge Masvidal which occurred at March’s UFC event in London.

Who do you think will emerge victorious when Kelvin Gastelum and Darren Till throw down tonight at Madison Square Garden? Sound off in the comments section PENN Nation!