Nick Diaz unsure why he is rematching Robbie Lawler at UFC 266: “I don’t know why I’m doing this. This should not happen.”

Nick Diaz will make his highly anticipated return to the Octagon on Saturday when he squares off in a rematch with Robbie Lawler at UFC 266.

The pair originally collided seventeen years ago in a welterweight bout at UFC 47, with the Stockton native emerging victorious by way of second round knockout. This time around Diaz and Lawler will compete at middleweight, a decision that was made earlier this week.

Nick Diaz (26-9 MMA), a former Strikeforce welterweight champion, last competed way back at UFC 183 in January of 2015. That evening in Las Vegas, the eldest Diaz brother lost a unanimous decision to MMA legend Anderson Silva. That fight ruling was later overturned to a no-contest, this after both Nick and ‘The Spider’ tested positive for banned substances. 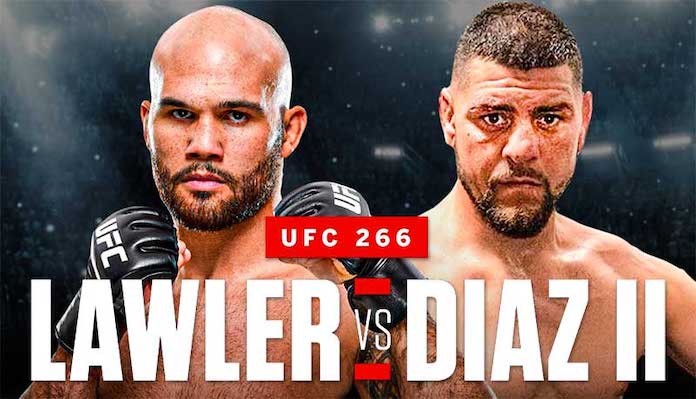 Despite not having scored a win since UFC 137 in October of 2011, when he defeated our namesake and former UFC lightweight and welterweight champion BJ Penn by unanimous decision in a ‘Fight of the Night’ affair, Nick Diaz believes he should have received a welterweight title shot in his return.

Speaking with ESPN’s Brett Okamoto, Diaz shared the following words of confusion regarding his upcoming rematch with Lawler at UFC 266.

“I think I’ll beat Usman,” Nick Diaz explained (via MMAMania). “I have a better shot at beating Usman than I do Lawler, just because I … I already beat Lawler! This doesn’t make sense, for me to go in there and fight Robbie Lawler. I don’t know why I’m doing this. This should not happen. Whoever set this up is an idiot. I don’t know why I’m doing this, why this happened — I should be fighting Kamaru Usman, and that’s it!”

Check out the video footage from the interview below: